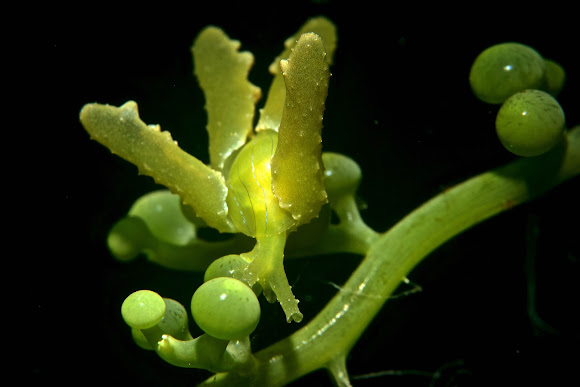 Lobiger souverbii is a species of small sea snail or sea slug, a marine gastropod mollusk in the family Oxynoidae. They are small sacoglossid, found primarily on the green algae, Caulerpa. It has retained an external shell which is semi-transparent. Like other sacoglossids it has rolled rhinophores. This species is characterized by its four long parapodial lobes, which often are seen rolled up like the rhinophores. These extensions of the mantle may become severed or autotomized when the animal is disturbed. This has led to some confusion, with several species (an in fact the original description of Lobiger souverbii) being described as having only two lobes. The body is green, making it difficult to find on its algal food source, with varying amounts of lighter speckling. The surface texture found on the foot and tail, also occurs on the lateral lobes and rhinophores.

Pic #3 shows the organism among its food plant. Although from the pictures, you can see the organism clearly, but due to its small size of around 2 cm, they are actually quite well camouflaged and the lobes is supposedly imitates the branches of the algae making them very difficult to spot.

Thanks, @Ashley for this honour! :)

Congrats again Albert, your camouflaged Sea Snail has made the top 10 other spottings in the '2015 Best Wildlife Photo' mission! Rangers are voting on the top 10 other spottings, and the top 3 will be announced on February 7th. The top 3 spottings will be commented on here on the site, but make sure you keep a look out on our Facebook app page for the announcement as well! Congratulations on making the top 10! https://www.facebook.com/projectnoah

Thanks, @SukanyaDatta for your kind comments.

Brave new world under the waves...thank you for bringing it to us.

Thanks, @amadeus, glad you enjoyed my underwater/sea spotting.
Hope more PN members will share their marine life spotting too, its a totally different world down there and lots of them can be so amazing!
Have a few more to post :D

Again, amazing spotting Albert. I had no idea about some of the sea life until your spottings! Thank you for sharing :)

Thanks, @Antonio.
Glad to be able to share this amazing critters from the sea :)

Awesome series Albert,great info too,congrats on another great spotting and thanks for sharing these amazing creatures,great work

Thanks, @Maria :)
Am aware this is the first spotting of the species on PN :)

Superb spotting, Albert. Really interesting and the first spotting of the species on Project Noah! Thanks for sharing this and your other wonderful spottings with us.

Thanks, @Leuba, @Mark & @Marta.
Don't mean to exaggerate, but will not be surprised if many avid divers/underwater photographers have not seen this too :D
They are actually hard to find, even when you locate the Caulerpa algae.

First time I ever see this guy! Many thanks for sharing, Albert! :-)

Another fascinating creature from you Albert. Thanks again. Just brilliant ! The algae looks interesting too.