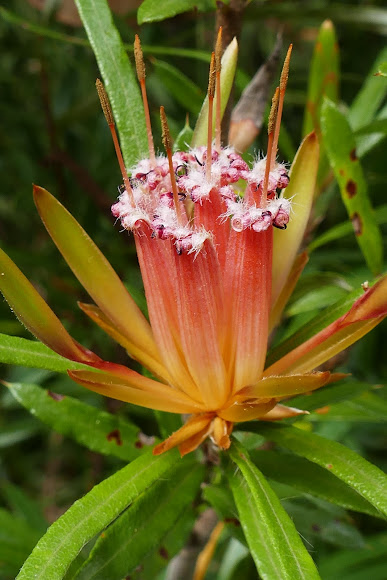 Lambertia formosa, commonly known as "mountain devil", is an Australian native plant of the family Proteaceae, and is endemic to NSW. The flowers hold profuse amounts of nectar and are pollinated by honeyeaters. It grows as a multi-stemmed shrub to around 2 metres with a woody base known as a lignotuber, from which it regrows after bushfire. It has stiff narrow leaves, and the pink to red flowerheads, made up of seven individual tubular flowers, generally appear in spring and summer. After flowering, hard fruit capsules develop that resemble a devil's head with horns, hence the common name. Each seed capsule contains two seeds.

The species is generally found in heathland or open forest, growing in sandstone-based soils. However, it is not confined to mountain areas and is often seen in bushland throughout the Sydney region including coastal heaths. I spotted this shrub in dense native bushland in the Fox Valley Reserve, along its southern boundary at North Epping in Sydney. Temperatures are still very warm (despite being autumn) which may account for this late bloom. Decent rainfall accounts for the area looking green and lush.

This site has a good image of the seed capsule. Does it look like a devil's head?.... http://anpsa.org.au/l-form.html

I think it's such a cool name though. Maybe it's just to scare the tourists? Watch out for the mountain devils!!

Yes you mentioned that in the notes...but the link is even better....Ha, ha ha...I see now why the name is quite justified. Still unfair though.

Thanks, Sukanya. It is a pretty flower, but the common name is derived from the seed capsule, not the flower itself. I've placed a link in the notes section - it has a photo.

Lovely spotting...not fair, the name for such a pretty flower I thought.