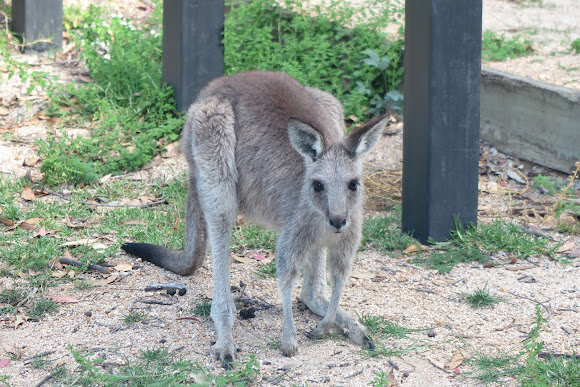 After a long and tiring day's bushwalking, I was returning to the camping grounds and walked right past this young female without even seeing her. It's only that she shook her head that I caught some movement and looked back, and she was just looking back at me as if to say "You just ignored me." She showed no fear whatsoever, so I took her photo. Then 3 more slightly larger roos bounded out of the bushes. I didn't expect to see roos here simply because the park is very rugged. It was a camping ground though and I'm sure they get the odd handout. There was no one else around, but they didn't seem to expect anything from me and were quite happy to graze on the fresh green grass. The rest of the mob had to be nearby, and as it was becoming late afternoon they would all be on the move. I'm pretty sure more would have shown up after I left.

Spotted at Castle Rock camping grounds in Girraween National Park, one of the few (soft) grass areas in the park. Here's some park info - http://www.rymich.com/girraween/

Thanks, Maria. It's a great national park, and I just revel in exploring it. I was exhausted when I spotted this little group - almost too tired to be bothered taking a few pics... but I just loves roos, so I did :)

Nice description of how you spotted her. Your trip to that park seems to have been very interesting!