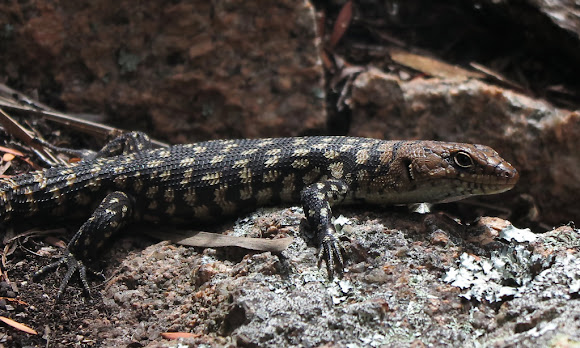 Cunningham's skink is a large skink species native to southeastern Australia. It can grow up to 30 cms in length, and has a distinctive keel on each scale which gives a slightly spiny appearance. Extremely variable in colour ranging from dark brown to black, with or without blotchy patches, speckles or narrow bands. It prefers to live communally in the crevices of rocky outcrops or hollow logs. It is a diurnal omnivore, and I saw this fellow feeding on the various lichens which covered the granite. It also snapped at the odd passing fly.

Spotted at Castle Rock in Girraween National Park. Although a common species here, I only spotted them at the highest points of the granite monoliths like Castle Rock. The extremes of weather and temperature variations would be immense. Here's some park info - http://www.rymich.com/girraween/

My first spotting of this species.

They're very handsome little guys. Quite bold too. I doubt they would see too many people where I was, so unless I moved suddenly, they would come out of their little lairs and investigate. Don't see this species in Brisbane.

Cool skink - like how the spots extend down onto its legs!