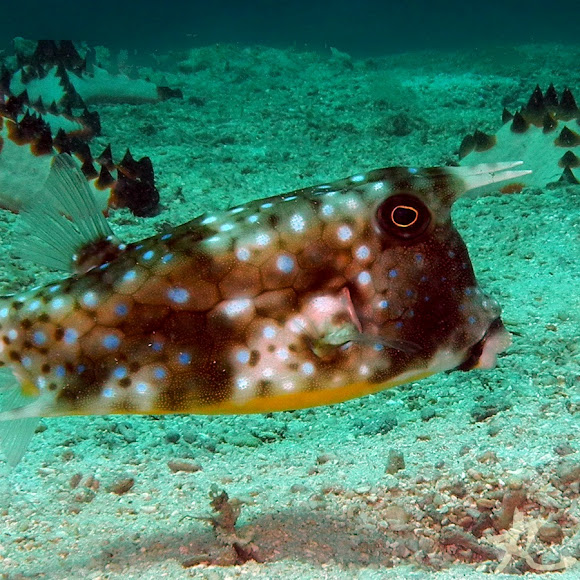 L. cornuta is a type of boxfish in the family Ostraciidae. It is recognizable by a pair of long, straight horns projecting forward from the top of its head. Its box-shaped body has cryptic coloring, ranging from green and olive to orange, with blue spots and whitish blotches. Its fins are translucent and its tail is almost as long as its body. This cowfish feeds on benthic invertebrates. It can blow away sand to expose its prey with a jet of water from its mouth. It also eats small crustaceans, mollusks, algae and small fish. This species grows to about 45cm in length.

This cowfish was in very shallow water: spotted it at the end of my dive, at around 5m depth in Dayang Beach. It was apparently feeding -- it was delightful to watch it blow on the sand and then plunge in to feed (watch the video!). During the day, I find cowfish to be very shy. But this one, measuring about 25cm or so, just looked at me and then continued with its business and let me approach to within touching distance.

Thanks for all your comments! :)