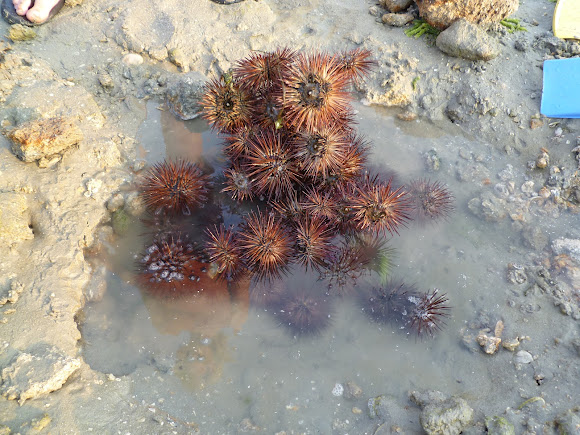 Purple sea urchins have a porcupine like appearance. Their long spines help deter predators and aid in movement. The spines and body are a deep purple color. The body which is also called the test is about 3-5 cm wide and made up of ten fused plates. Each of these fused plates has small holes for a foot. The feet are controlled by varying the amount of water inside to extend or contract them as needed. They can also create a small suction at the end of the foot. Sea urchins are radially symmetrical. They have five hard plates that move together like a beak on the underside of their body. This special structure is called Aristotle's lantern. It's used to scrape algae from rocks and it can regrow as it is worn down. Their anus is at the top of the animal. Sea urchins produce eggs that hatch into a larval stage.

Found most commonly on rocks, sand or shell bottoms in salt water. They live at the low-tide line down to a depth of about 750 feet.

Sea urchins and their eggs are edible. They are also often used in laboratories by developmental biologists to study reproduction and development. They do not naturally form a pile as seen in my first picture. My daughter used a bucket to collect them from rocks during low tide. As the tide came in the sea urchins spread out in all directions.