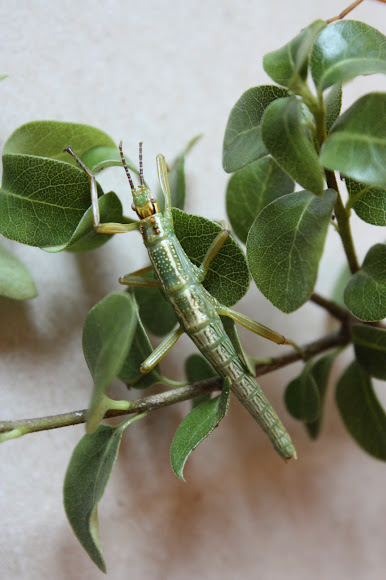 Small spiny stick insect is critically endangered. These young specimens were bred through a school program to rescue this species. Qualifying schools are allocated ten eggs each and these are three of the four that hatched so far. Yay!!!

This species from Lord Howe Island was long thought to be extinct. Introduced rats have exterminated them all. In 1991 three females were discovered on a barren rocky island nearby http://vibik.com/travel/65-awesome-balls... Luckily females are parthenogenic and were brought to Australia for breeding. Is this the rarest species on our planet?

I have made an attempt to acquire some myself but as you say, they are technically an exotic species and should not be introduced. Feasibly our rats would control them too, but ecology is more complex than that.

Thanks for the great info martini. I remember hearing about the rats on Lord Howe and the damage they have done many years ago. People make me despair sometimes. I suppose if we release them in our own gardens we have another potential Cane Toad event.

Stephen, the school breeding program has led to 10 000 specimens being hatched so far. Of course they live for 12 months so there are not that many surviving. Returning them to Lord Howe Island is problematic as there are still rats there. They were decimated by rats. Locals who remember them don't really want them back as they make noise at night. Saving creatures from extinction can present some curious challenges.

Yay indeed! May there be many more!

Thanks Mark. I have not seen this new species. It looks similar to our Queensland peppermint stick insect but is wingless. The wingless LHP is also similar but has a color change in its final molt. http://www.ozanimals.com/Insect/Peppermi...

I missed this spotting martin. Glad the program is working out. Did you notice (I suppose you did) the 'new' phasmid found in the Philippines? Superficially it looks similar to these but is very different in other ways... http://www.bbc.co.uk/nature/19399735

Thanks Emma and lori . These will be dark brown and entirely wingless when adults.

I read about these Martin. Very, very cool.

Congratulations for successful breeding!!
Martin , Could this possibly be the "Big Brown Mantis" native to Australia?
It was rather big and did not have any green in it like a Chinese mantis. At least 3 to 4 inches Long.
http://www.projectnoah.org/spottings/126...
Thanks in advance, Decided to tap on your knowledge of Mantids!