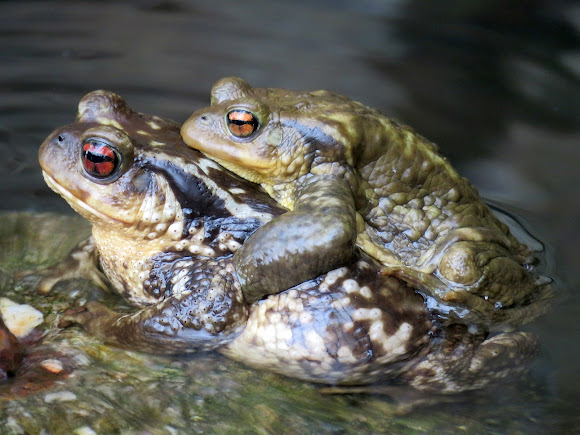 The common toad can reach about 15 cm (6 in) in length. Females are normally stouter than males and southern specimens tend to be larger than northern ones. The head is broad with a wide mouth below the terminal snout which has two small nostrils. There are no teeth. The bulbous, protruding eyes have yellow or copper coloured irises and horizontal slit-shaped pupils. Just behind the eyes are two bulging regions, the paratoid glands, which are positioned obliquely. They contain a noxious substance, bufotoxin, which is used to deter potential predators.

After the common frog (Rana temporaria), the edible frog (Pelophylax esculentus) and the smooth newt (Lissotriton vulgaris), the common toad is the fourth most common amphibian in Europe.

Found in a small fountain in the Abrantes Castle city garden.