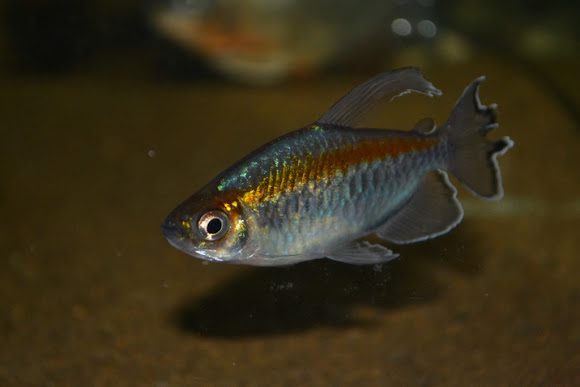 The Congo tetra has a typical full-bodied tetra shape with rather large scales. When mature, the iridescent colors of the Congo tetra run through the fish from front to back, starting with blue on top changing to red through the middle, to yellow-gold, and back to blue just above the belly. It is not its fluorescent colors that make this tetra so distinct, but rather its tail fin, which develops into a most beautiful grayish-violet feathery appendage with white edges. The males get up to 3.0 inches (8.5 cm). Females up to 2.75 inches (6 cm). The male is larger with more color, also the tail fin and dorsal fin are more extended.

The Congo tetra (Phenacogrammus interruptus) is a species fish in the African tetra family. It is found in the central Congo River Basin in Africa. It is commonly kept in aquaria.