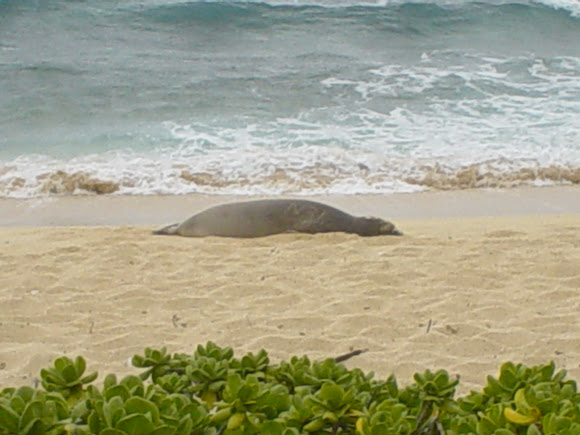 The Hawaiian monk seal is a species in crisis. There are currently fewer than 1,100 seals remaining and their numbers continue to decline by 4% per year. The challenges they face are numerous including shark predation, human disturbance and habituation, fishery interactions, habitat loss, entanglement in marine debris, infectious disease, and even intentional killings. If the current population trends aren’t reversed, the population is expected to slip below 1,000 within the next few years. Hawaiian monk seals are the only true seals to be found year-round in tropical waters (2). After the annual moult, this monk seal is a silvery grey colour on the back, with cream colouring on the throat, chest and underside (4). Over time the coat looks brown above and yellow below; males, and some females, turn almost black with age (2). Certain individuals may have a red or green tinge or spots due to algal growth (4). Pups measure about one metre at birth and have a silky black coat, which moults after around a month into the silvery adult-like fur (5).

Hawaiian monk seals occur throughout the Hawaiian Island chain. Their six main reproductive sites are in the northwestern Hawaiian Islands at Kure Atoll, Midway Atoll, Pearl and Hermes Reef, Lisianski Island, Laysan Island, and French Frigate Shoals (National Marine Fisheries Service 2007). While sightings were previously rare in the main Hawaiian Islands, monk seals are now regularly seen there and births have been documented on all of the major islands (Baker and Johanos 2004). Sightings outside of the main range have occurred at Johnston Atoll, Palmyra Atoll, and Wake Island (Ragen and Lavigne 1999). Hawaiian monk seals are non-migratory, and tend to remain near the atoll where they were born. However, some seals will relocate temporarily or permanently to other sites in the island chain, and long distance wanderers have been recorded.

This sleeping monk seal has been bleached mark N31.

What a wonderful spotting Erik. That must have been a wonderful experience! Thank you for the info and for sharing :)