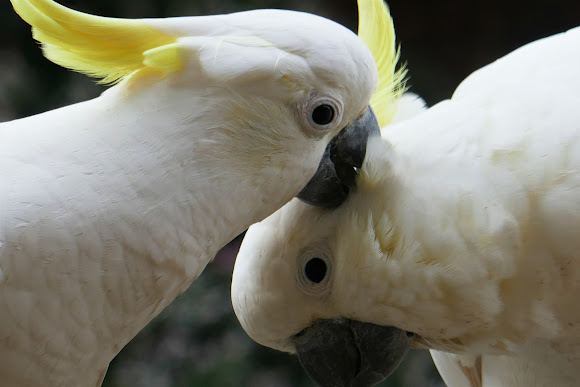 A "crackle" of cockatoos*. No doubt that's the sound they make when they're eating your house!... but crackle it is, and that's the correct collective noun for a group of cockatoos! If ever there's a book written about birds behaving badly in Australia, then cockies will be on the front cover, guaranteed! But they are gorgeous and funny and fascinating, and I love them. They are iconic and quintessentially Australian birds! Here's a spotting I made on the same day in March, of a cockatoo nesting in the bush only a short distance away.... https://www.projectnoah.org/spottings/17... NB: The first three photos in this set were taken in March, 2021, and the later three were taken last week, in June 2021. The grooming pair are part of a subgroup of about six birds, and they frequent the area often, sometimes going from house-to-house hoping for handouts. They form part of the larger group shown here, which represents a substantial part of the crackle, but there are still many birds that weren't present here. I could hear them off in the trees farther afield! PS: There's loads of information about the species available via the reference links.

Suburban area in northern Sydney, Australia. They frequent the Devlins Creek bushland area quite often, just a short distance away. Local plantings of tree species like liquidambars, kumquats, crabapples and magnolias, are always favouites when fruiting, and they attract a large variety of parrot species, particularly the sulphur-crested cockatoos!

*I posed the question.... "What is a group of cockatoos called?" The proper term for a group of cockatoos, as defined in the Macquarie (dictionary), is "a bloody nuisance!" Hahaha That's a typically Australian response! The correct answer is "crackle".

Thanks, Jae. Much appreciated. They are beautiful birds!

Thanks, Sukanya. When "cockies" are involved, there's always a story to tell!

The cockatoo spottings are going great!!! And the notes are too good.