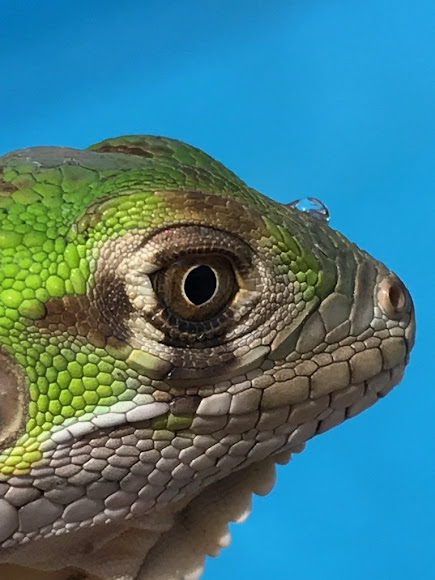 The green iguana is a large lizard and is probably the largest species in the iguana family, though a few in the genus Cyclura may match or exceed it in weight. Adults typically grow to 1.2 to 1.7 m in length from head to tail. As in all iguanas, the tail comprises much of this length, and the snout-to-vent length of most green iguanas is 30 to 42 cm. An average adult male will weigh around 4 kg while the smaller adult female will typically weigh 1.2 to 3 kg. A few large males can reach or exceed 6 to 8 kg in weight and 2 m long. Some specimens have even reportedly been measured at a body weight of greater than 20 lb. Green iguanas possess a row of spines along their backs and along their tails, which helps to protect them from predators. Their whip-like tails can be used to deliver painful strikes and like many other lizards, when grabbed by the tail, the iguana can allow it to break, so it can escape and eventually regenerate a new one. In addition, iguanas have a well-developed dewlap, which helps regulate their body temperature. This dewlap is used in courtships and territorial displays. Green iguanas have a white photosensory organ on the top of their heads called the parietal eye (also called the third eye, pineal eye or pineal gland), in contrast to most other lizards that have lost this primitive feature. This "eye" has only a rudimentary retina and lens and cannot form images, but is sensitive to changes in light and dark and can detect movement. This helps the iguana detect predators stalking it from above. Green iguanas have very sharp teeth that are capable of shredding leaves and even human skin. These teeth are shaped like a leaf, broad and flat, with serrations on the edge. The similarity of these teeth to those of one of the first dinosaurs discovered led to the dinosaur being named Iguanodon, meaning "iguana tooth", and the incorrect assumption that it had resembled a gigantic iguana. The teeth are situated on the inner sides of the jawbones, which is why they are hard to see in smaller specimens.

In the pool in a garden at cliffs on the Volcano Mount Scenery in the Caribbean Sea. I found it trying to climb its way out of the pool. I helped.

Green iguanas are diurnal, arboreal, and are often found near water. Agile climbers, Iguana iguana can fall up to 50 feet and land unhurt (iguanas use their hind leg claws to clasp leaves and branches to break a fall). During cold, wet weather, green iguanas prefer to stay on the ground for greater warmth. When swimming, an iguana remains submerged, letting its four legs hang limply against its side. They propel through the water with powerful tail strokes. While they may often be found in trees, these animals are well-known burrowers. The size of their burrow can range from between 0.3 and 2.4 m deep, with a diameter of 10 to 20 cm. They have been observed burrowing in canals, levees, and dikes and along seawalls in southern Florida. If an individual does not dig their own, they may even use gopher tortoise burrows or usurp those of the Florida burrowing owl. Primarily herbivorous, green iguanas are presented with a special problem for osmoregulation; plant matter contains more potassium and as it has less nutritional content per gram, more must be eaten to meet metabolic needs. As green iguanas are not capable of creating liquid urine more concentrated than their bodily fluids, like birds they excrete nitrogenous wastes as urate salts through a salt gland. As a result, green iguanas have developed a lateral nasal gland to supplement renal salt secretion by expelling excess potassium and sodium chloride.

Thanks Zlatan!
Isn't this just an amazing creature?