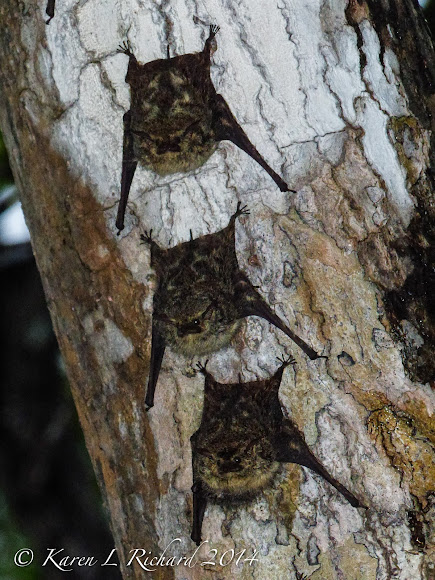 Proboscis bats live in groups. The colonies are usually between five and ten individuals, and very rarely exceed forty. The bats are nocturnal, sleeping during the day in an unusual formation: they lay one after another on a branch or wooden beam, nose to tail, in a straight row. This small species of bat has been found to occasionally fall prey to the large spider Argiope savignyi.

Thanks for the correction Dominik!

It is the other one, Rhynchonycteris naso. Note the "striped" legs. Saccopteryx bilineata has complete black legs.
http://fireflyforest.net/firefly/2007/07...
http://darnis.inbio.ac.cr/ubis/FMPro?-DB...

Wonderful spotting! Love how they line up on the trunks. I always wanted to find this!

Great series, Karen! I love the contrast to the bark on the tree. Welcome back!

Wonderful series; they're so well organized!