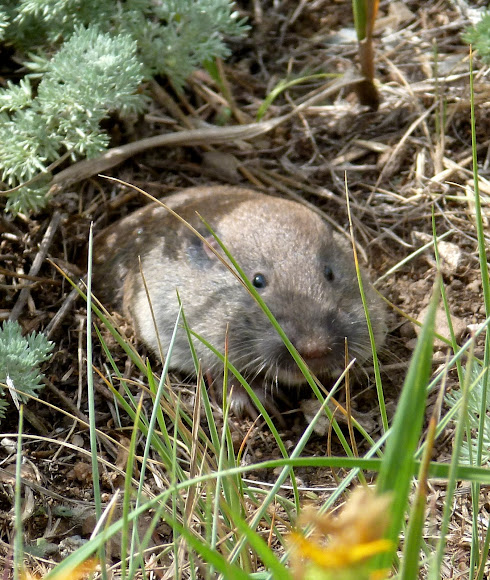 Of all North American pocket gophers, the Northern Pocket Gopher has the widest distribution, across most of the western United States and south-central Canada, and it occurs in the greatest variety of habitats. Only habitats with closed canopy and sparse groundcover are avoided. Northern Pocket Gophers are prodigious diggers, using both their front feet and their ever-growing incisors. Their burrow systems are elaborate, and depending on where they are, can be beneficial, aerating the soil, or a real problem for farmers.

Their habitat consists usually of good soil in meadows or along streams; most often in mountains, but also in lowlands. This one was seen in a meadow in the grounds of the Shambala Meditation Center which is in the mountains an hour west of Fort Collins, Colorado.

This little fella posed a couple of times for a photo, ducking back into it's tunnel inbetween. When it had had enough it just back-filled the tunnel with dirt, closing it off! End of photographic session!

@emilyMarino, I think I was really lucky to spot him...

Oh. My. God. What a cutie! I didn't know we had these guys in Colorado! The second picture with his chubby cheeks are priceless! Love those claws too!

@nexttogone, all the better to dig with! Thanks for your comment...

No problem Pamsai. Thank you for the pictures. These guys don't come out to often so its is wonderful to get such great pictures of them.

Well thank you bee.jacbs for both the ID and the info about these cute little creatures.

Nice series! This cutie has some long claws too!

Hi Pamsai. Great spotting! This is an adorable pocket-gopher. It is told apart from other pocket-gophers by the white patch underneath its chin, and the dark patches behind its ears, both of which you captured beautifully! Keep up the great spottings. :)

This little fella posed a couple of times for a photo, ducking back into it's tunnel in between. When it had had enough it just back-filled the tunnel with dirt, closing it off! End of photographic session!