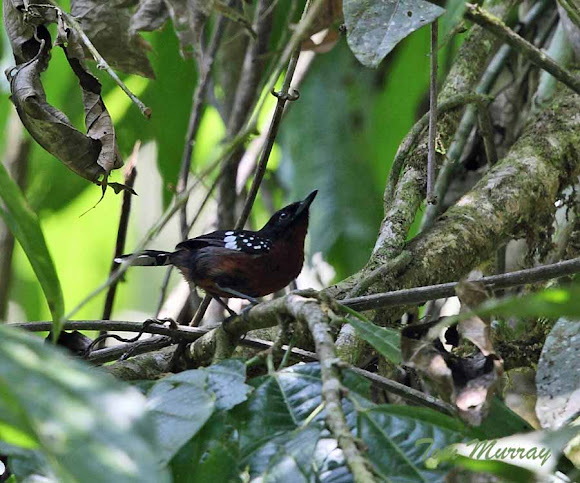 The sole member of the genus Microrhopias, the Dot-winged Antwren is generally an easily identified bird over its extremely broad geographical range, which extends across most of Middle America from southeast Mexico, northwest South America as far south as western Ecuador, and much of southern Amazonia, as well as more locally in the Guianas. The genus’ relationships are uncertain, although vocal and morphological characters suggest that Formicivora is its closest relative, while the ten subspecies of Microrhopias that are currently recognized beg serious, wide-ranging and detailed investigation, as striking plumage variation is evident, sometimes over short geographical distances. The Dot-winged Antwren regularly joins mixed-species flocks, although its associations with these groups are usually short-lived, and this species is just as liable to be observed alone, or in pairs. It inhabits the midstory of lowland and foothill forests, including tall second growth, and indeed the species is only rarely found in the interior of primary forest. (Cornell)