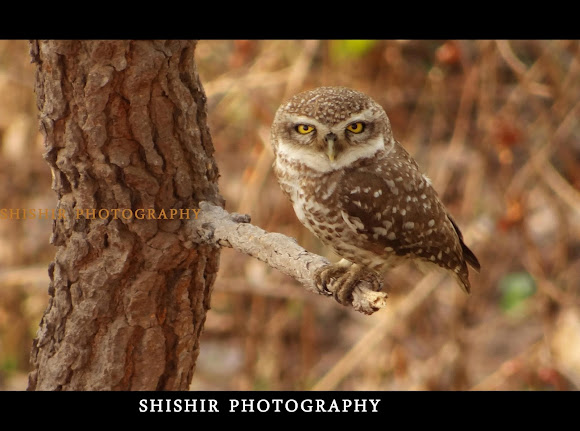 The Little Owl is a small owl, 23-27.5 cm in length. The adult Little Owl of the most widespread form, the nominate A. n. noctua, is white-speckled brown above, and brown-streaked white below. It has a large head, long legs, and yellow eyes, and its white “eyebrows” give it a stern expression. This species has a bounding flight like a woodpecker. Juveniles are duller, and lack the adult's white crown spots. The call is a querulous kee-ik. There is a pale grey-brown Middle Eastern type known as Syrian Little Owl A. n. lilith. Other forms include another pale race, the north African A. n. desertae, and three intermediate subspecies, A. n. indigena of southeast Europe and Asia Minor, A. n. glaux in north Africa and southwest Asia, and A. n. bactriana of central Asia. A recent paper in the ornithological journal Dutch Birding (vol. 31: 35-37, 2009) has advocated splitting the southeastern races as a separate species Lilith's Owl Athene glaux.