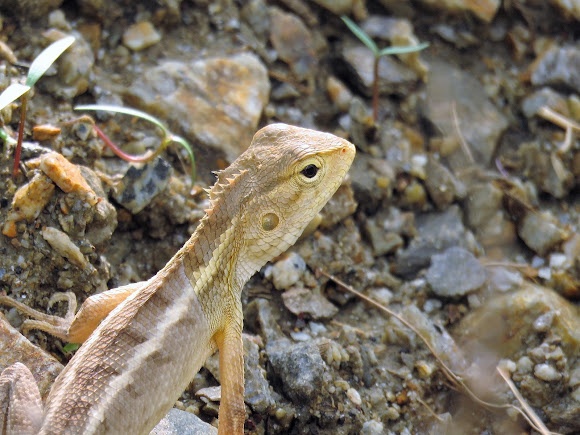 Also known as Eastern garden lizard or Changeable lizard, this is an agamid lizard found widely distributed in Asia. Pictured here is female, Total length of some 30 cm, long thin tail taking some 2/3 of it. The crest is visible but barely, much less striking than in males - it goes from head to the tail. In parallel to the crest, and on each side of it, two lighter colored ridges.

Here seen in "mid hills" areas of Nepal, at the entrance of the district of Okhaldhunga; on the banks of rivers that follows the road Kathmandu - Himalayas. This are in general drier areas, but being situated lower and on banks of rivers, they are greener than the rest.

Have seen these lizards many times while wandering in Nepal this last month, almost everywhere; and have observed many females (and juveniles? I guess everywhere. BUt, I had only one occasion to observe a male, and in its breeding phase starting (my previous spotting - http://www.projectnoah.org/spottings/851...)... (and no, I was not there for them, they were part of my 'relaxation' activities... ;-) )