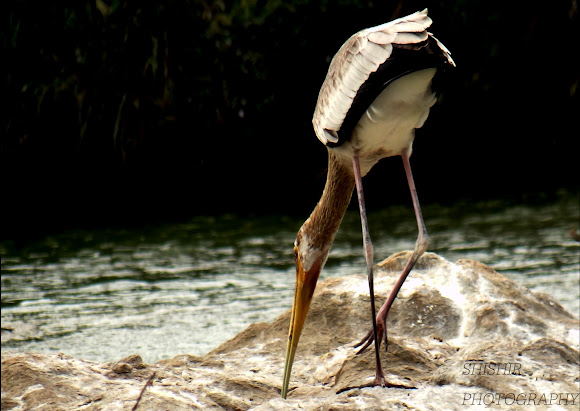 This large stork has a heavy yellow bill with a down-curved tip that gives it a resemblance to an ibis. The head of the adult is bare and orange or reddish in colour. The long tertials are tipped in bright pink and at rest they extend over the back and rump. There is a distinctive black breast band with white scaly markings. The band continues into the underwing coverts and the white tips of the black coverts give it the appearance of white stripes running across the underwing lining. The rest of the body is whitish in adults and the primaries and secondaries are black with a greenish gloss. The legs are yellowish to red but often appear white due their habit of urohidrosis or defecating on their legs especially when at nest. The short tail is black with a green gloss.For a stork, it is medium-sized, standing about 93–102 cm (37–40 in) tall, 150–160 cm (59–63 in) in wingspan and weighing 2-3.5 kg (4.4-7.7 lbs). Males and females appear alike but the males of a pair are usually larger than the female.[3] The downy young are mainly whitish with grey bills and blackish facial skin. The juveniles assume a brownish plumage and like most other storks reach breeding condition after two to three years. Like all storks, they fly with their neck outstretched. They often make use of the late morning thermals to soar in search of foraging areas.

Nice spotting Shishir. we have a local mission for south Indian Birds- http://www.projectnoah.org/missions/8472...