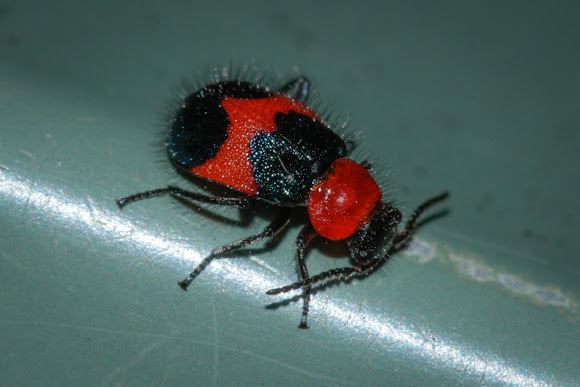 The beetle is bright red in colour with four metallic blue/green spots on the elytra. Female as a male the antenna 3rd segment is enlarged. Noticing mine is quiet hairy compared to others spotted !!! maybe the tassie climate ;)

This species of beetles are partly predacious. They search over plants during the day. They eat eggs, larvae and other slow-moving insects, pollen

Red and blue beetle (Dicranolaius bellulus) - According to the TIA Tasmanian Institute of Agriculture - a big pest in our potato fields. Also known as a Pollen Beetle. The egg, larval and pupa stages are in the soil.