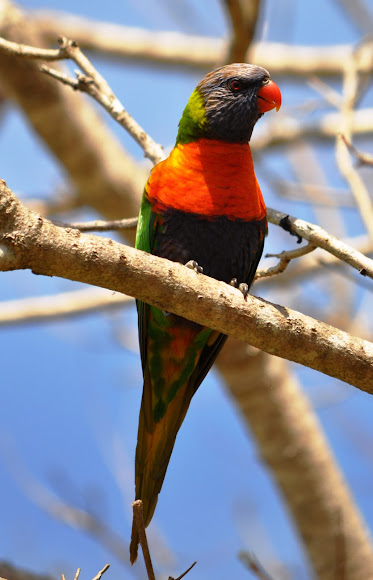 Medium sized parrot, this species has the yellow/green strip across the nape, rest of body is a mixture of patches coloured green, orange/red, yellow, purplish/blue, adults have red/orange beak, red eyes. A pollen, fruit and nectar feeder with specially designed brush tongue. Loud and aggressive at times, usually in flocks but sometimes alone or in pairs.

Found throughout eastern Australia and has been introduced elsewhere in the country. Also found in nearby overseas countries. This one in woodland environment near flowering gums. naturally found in rainforest and woodland/ heath environments with good food sources.

Thanks Sarala and Dixie. Beautifully coloured birds, but they always behave as though they got out of bed with a headache.

What a beautiful bird.