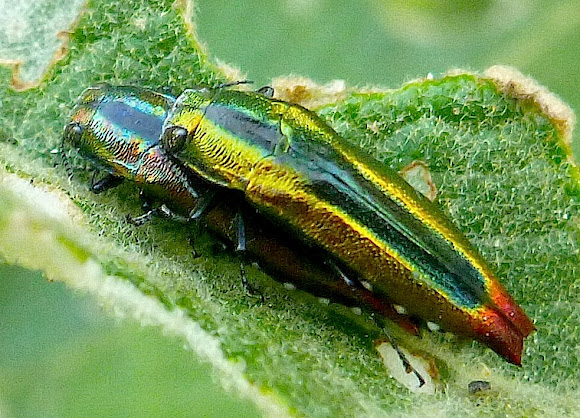 They drop to the ground and play dead when disturbed. This species has been observed farther north in Mexico, in Quila, Jalisco in September of 2016 (http://www.inaturalist.org/observations/...). An identification has not yet been reported. See also: http://www.projectnoah.org/spottings/165....

Thank you thaptor! It was nice to know it has been seen elsewhere in Mexico. Jalisco is quite a bit north of San Cristobal, Chiapas. I don't know the plants I see these on. I can find them every Nov-December though. You are so right about the insect-plant relationships and I wish I knew more botany. The plants I see them on are all local bushy things.

Ohh, you got so many beetles, Lauren! - even this showy one, of which I'm still curious what it is . . .
on NaturaLista, there are two obs. already, on the same plant species, it seems. Was yours similar?

A valuable goal for all "Citizen scientists" is the detection of animal-plant relationships - in beetles, largely unknown still. You easily find something new, if you have an eye on that.

Congrats Lauren for your first year in Project Noah! And I agree with you this is a wonderful place full of discoveries and friends.

Today is my first anniversary in Project Noah. I would like to thank PN and all my new friends for a wonderful year of sharing and learning. I love seeing nature from all your different points of view and exotic places. I have learned more this year than in many years past combined! Thank you all so much.

Very nice first spotting on Noah - welcome to the Project! Until you find out which species it is, could you add Buprestidae as the scientific name?