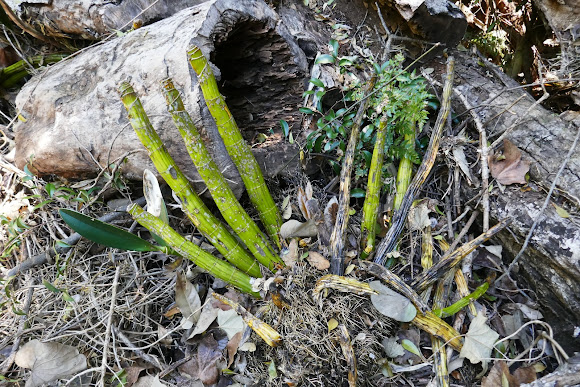 Dendrobium speciosum, commonly known as rock lily, rock orchid or cane orchid, or more specifically King Orchid, is a species of highly variable Australian native orchid. Its varieties can be found in a range of habitats, either as an epiphyte (on branches or trunks of trees) or a lithophyte (on rocks). It has a continuous distribution along the east coast of Australia and in distinct populations along the Tropic of Capricorn, and there are upwards of ten subspecies. This spotting could be one of two possible subspecies: D.s. grandiflorum or D.s hillii. From what I can tell, stems and leaves are identical for both subspecies, but the colour of the flowers is where they differ. D.s. grandiflorum, commonly known as the Golden King Orchid, has between 50 and 150 relatively large, creamy-yellow to bright yellow flowers. D.s hillii, commonly known as the Pale King Orchid, has between 70 and 200 crowded white or cream-coloured flowers. Unfortunately, I was just a little bit too early to see any of the flowers in bloom, and as I don't know what colour they are, I'm not able to correctly ID the subspecies. A few days later would have made a world of difference. Flowering is usually between August and October. The specific epithet (speciosum) is a Latin word meaning "beautiful", "splendid" or "showy". PS: Dec 22, 2018 - Hiker blogs that I have read have mentioned orchids with bright yellow flowers clinging to the rock faces and clifftops in this area of the national park, particularly along the western ridge. That now tell me the subspecies for this spotting is D.s. grandiflorum, the Golden King Orchid. Regardless, I was still too early to see these orchids in bloom. Maybe next time.

The specimens shown in the first three photos are of epiphytic plants. It appears that the host trees were toppled in a storm. This area is well-shaded with dense, subtropical vegetation. The last three photos are of lithophytic plants growing in clusters on a rocky clifftop. They form quite a decent colony and are mostly in full sun, although the thick matting of roots helps retain moisture. This area is exposed to the elements, particularly strong winds and storms that roll in from the western plains, but there is also a waterfall nearby and if conditions are right, water spray would reach these plants. This spotting was along the western ridge of Bunya Mountains National Park, southeast Queensland. Here's some info on the park - https://parks.des.qld.gov.au/parks/bunya...

Acording to the Australian National Botanic Gardens (ANBG) site, Dendrobium speciosum has undergone a name change during a major taxonomic revision of the Dendrobium group and is now renamed Thelychiton speciosus. The reference link (403 Forbidden but it still works) also gives a description of the name meaning. I have chosen to use the previous name Dendrobium speciosum so as not to confuse. There's more information online using this name, hence searching for information is easier. Just bear in mind there is a new scientific name for this species and its variety of subspecies.