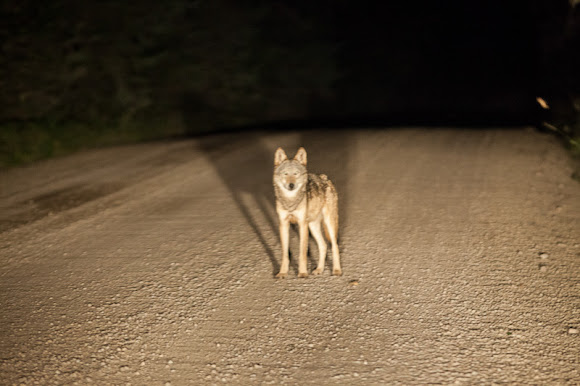 Gray Wolves are a large species of canid and are native to much of the northern hemisphere. Males may weigh in excess of 45kg (100 lbs.) with females being on average slightly smaller. The fur is typically thick, especially in the more northerly part of its range and can vary widely in color from white to black with most wolves being a grizzled gray above and lighter below.

At one time, wolves were arguably the most widespread mammal in the world, exceeded only by humans. As a result, they are considered widely adaptable animals and were once found in many different habitats ranging from tundra to desert. Their range has been widely restricted due to human persecution and habitat loss. Wolves were once considered wilderness obligates able only to live in wilderness conditions. They are, however, extremely adaptable as mentioned above and here in Minnesota have expanded their range out of the northern wilderness and are now living in close proximity to humans. For instance, we have wolf packs whose territories now well overlap agricultural zones in Minnesota and Wisconsin. It appears that they need room to roam, deer on which to prey, and less persecution as prerequisites to surviving in human-dominated areas. Some research seems to indicate that road density may play an important determinant in which wolves may live (in terms of being struck by cars and in hunting of this large predator by humans).

I took this photo while in northern Minnesota photographing black bears. I was driving back to my campsite to catch some sleep when this young wolf emerged from the forest and stood in the road. I stopped and slowly got out of my car with camera in hand. Unfortunately, it was impossible to focus in the dark and the focus is soft on this photo, plus it took me an inordinate amount of time to ratchet the ISO up to 4000 and to make other settings adjustments. I thought the wolf was alone, but when I got home and uploaded the photos the "eyeshine" of another wolf is visible in the upper right of the photo. Ironically, I took this photo one year ago today.

Yes, when you mentioned Krueger the first thing I though about was the many large predators that you have and thinking that I'd not get out of my car there, especially at night. Still, it must be a grand place and it's very much a place I'd like to visit some day.

that is amazing, thank you for sharing. over here we hear about the odd lion attack, but i mean like one every 5 or 10 years, and it is usually a tourist. so we stay put in vehicles. and then of course the shark attacks rising to one death a year here in Fish Hoek area. Suppose it is Dark Africa for a reason!

It crossed my mind that the wolf grinning so happily to my front might have been a decoy to focus my attention from those sneaking up behind me...grin. But North American wolves tend to be furtive and non-aggressive around people. To my knowledge there has been only one attack in North America's known history in which a wild wolf killed a person and any predator that can drag down a deer, elk or moose is fully capable of killing a person. The Boundary Waters is a huge tract of heavily-visited area used by people canoeing deep into the wilderness, which is well-populated by wolves. As a result, relatively defenseless people and wolves almost certainly have thousands of encounters each year. I've heard them howling at night, found their scats and tracks, and remains of their prey frequently while canoeing and camping there. On one occasion I found wolf tracks at the edge of a lake still slowly filling with water, indicating that the wolf was there just seconds earlier. Still, I've never heard of anyone being bothered by wolves and even sightings are rare in the Boundary Waters. I suspect nearly all encounters are known only to the wolves.

great shot and story. where you not afraid that there might have been more behind you? I only have the Kruger National Park to compare with and we are not allowed to get out the car! Not that I want to most times...

I'm not very familiar with that area, but Mille Lacs Kathio is really nice and not too far from there. Great history and quite a bit of wildlife. I'd look for eagles, deer, and chipmunks there. I've camped at Cayuna State Recreation Area, which is also close by. There I'd be looking for loons, but a boat might be necessary. There are a number of public lands nearby, but I'm not familiar with them.

And that would have made my day!! or night... I'll be up around Whitefish Lake (Brainerd area) in a couple weeks...have you seen anything extraordinary lately? Any suggestions on where to go?

Thanks Christy. Even though the photo isn't the sharpest it is still one of my favorites and it brings back lots of memories of being on this backroad at night accompanied only be wolves.

What a moment! Love the story, Gordon! Great spotting!