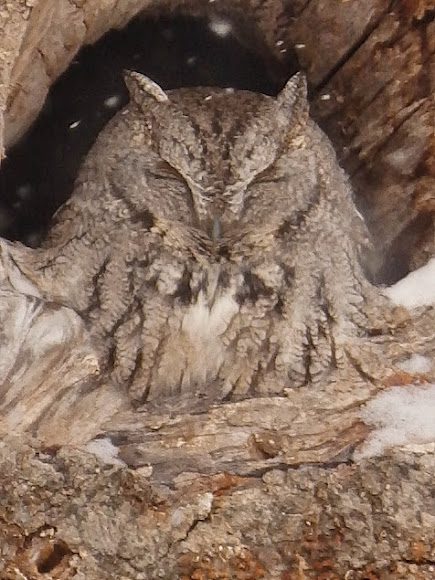 Eastern screech owls are strictly nocturnal, roosting during the day in cavities or next to tree trunks. They are quite common, and can often be found in residential areas. However, due to their small size and camouflage, they are much more frequently heard than actually seen. These owls are frequently heard calling at night, especially during their spring breeding season. Despite their name, this owl (nor most "screech-owls") doesn't truly screech. The eastern screech owl's call is an eerie tremolo with a descending, whinny-like quality. They also a monotone purring trill lasting 3–5 seconds. Their voice is unmistakable and follows a noticeably different phrasing than that of the western screech owl. The lugubrious nature of the eastern screech owl's call has warranted description such as "A most solemn graveyard ditty, the mutual consolation of suicide lovers remembering the pangs and delights of the supernal love in the infernal groves, Oh-o-o-o, had I never been bor-r-r-n. - from wikipedia