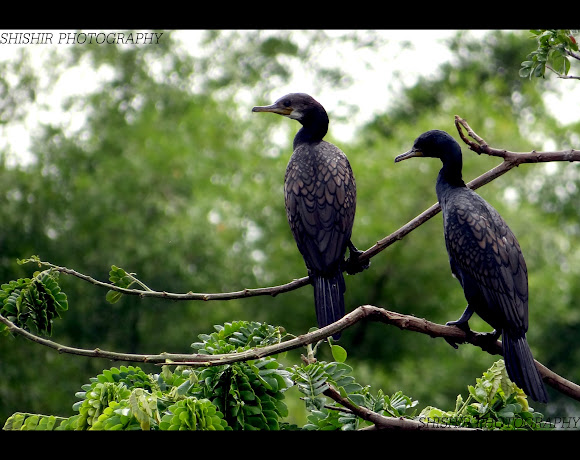 The Little Cormorant is about 50 centimetres (20 in) long and only slightly smaller than the Indian Cormorant (Phalacrocorax fuscicollis). The Indian Cormorant has a narrower and longer bill with ends in a prominent hook tip, blue iris and a more pointed head profile. The breeding adult bird has a glistening all black plumage with some white spots and filoplumes on the face. There is also a short crest on the back of the head. The eyes, gular skin and face are dark. In the non-breeding bird or juvenile, the plumage is brownish and the bill and gular skin can appear more fleshy. The crest becomes inconspicuous and a small and well-marked white patch on the throat is sometimes visible. Towards the west of the Indus river valley, its range can overlap with vagrant Pygmy Cormorants (Microcarbo pygmaeus) which can be difficult to differentiate in the field and is sometimes even considered to be conspecific. The sexes are indistinguishable in the field but males tend to be larger. Some abnormal silvery-grey plumages have been described. The species was described by Vieillot in 1817 as Hydrocorax niger. The genus Hydrocorax literally means water crow. It was later included with the other cormorants in the genus Phalacrocorax but some studies place the smaller "microcormorants" under the genus Microcarbo.

Thank you so much RobBielawski :)