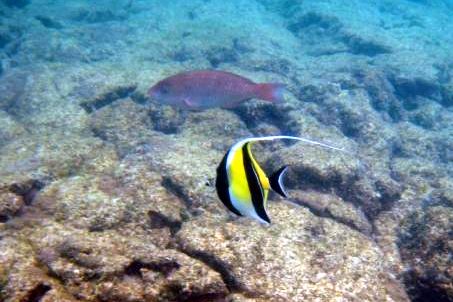 Moorish idols have distinctively compressed and disk-like bodies, moorish idols stand out in contrasting bands of black, white and yellow. Relatively small fins, except for the dorsal fin whose 6 or 7 spines are dramatically elongated to form a trailing, sickle-shaped crest - the philomantis extension. (wikipedia)

Shallow waters, flat reefs. Found at depths from 3-180 meters. Can be seen in both murky and clear waters.

Diurnal, mate for life. ***Kahaluu Beach Park is a tiny sheltered cove on the west side of the Big Island right in the town of Kailua Kona. It’s one of only a handful of beaches in Hawaii with such a large tame fish population. ***