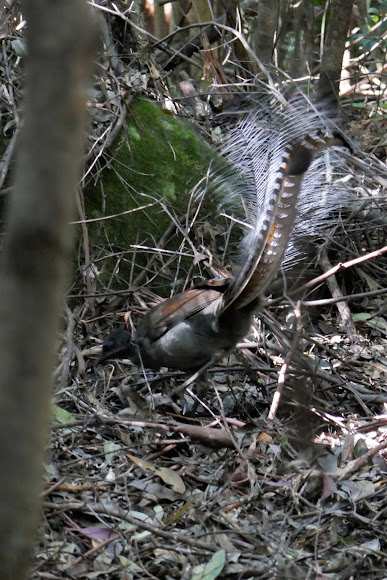 My 600th spotting on PN, and this is definitely a special one for me because it documents my first encounter with a wild lyrebird. In fact, this is a Superb Lyrebird, an Australian native songbird, and one of two species from the family Menuridae. Roughly pheasant-sized, it's a terrestrial passerine and is one of the world's largest songbirds. Check out the videos I've linked (in the notes section) to hear their vocal abilities. Wild lyrebirds are shy and difficult to approach, and these photos were difficult to take - dense undergrowth, dark, and the bird was moving as it fed, always maintaining the same distance from me. Never mind. The superb lyrebird is featured on the reverse side of the Australian 10 cent coin, and is also on the NSW National Parks and Wildlife Service emblem.

Dense, moist, subtropical rainforest in Washpool National Park. Spotted along the Coombadjha Track with its variety of mosses, fungi and lichens, ground ferns, lianas, coachwood, strangler figs, blue gums, red cedar, etc. The park is part of the Washpool and Gibraltar Range area of the Gondwana Rainforests of Australia World Heritage Site, inscribed in 1986 and added to the Australian National Heritage List in 2007.

Listen to their mimicry - this BBC Earth video gets really interesting around 1:10 minutes - https://www.youtube.com/watch?v=VjE0Kdfo... And in this second video from around 2:50 minutes, I can identify at least a dozen native birds species mimicked, and the lyrebird obviously loves this fellow because it seems to be wooing him - https://www.youtube.com/watch?v=wky_xsmR... A lyrebird's song is one of the more distinctive aspects of its behavioural biology. They sing throughout the year, but the peak of the breeding season, from June to August, is when they sing with the most intensity. The song of the superb lyrebird is a mixture of elements of its own song and any number of other mimicked songs and noises.

Cheers, Christine. And it took me 4.5 years to get here. I've just plodded along.