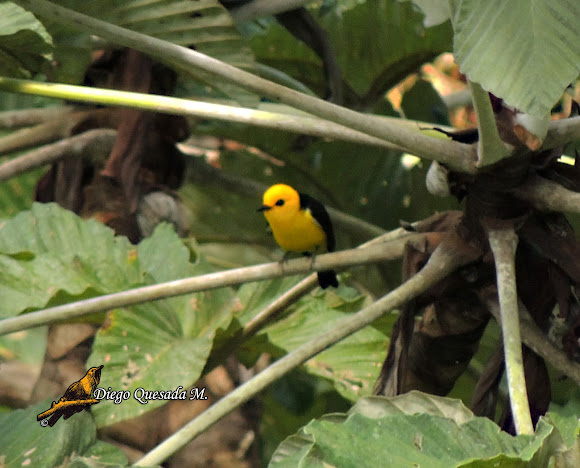 Yellow head, chest and underparts, with black wings, back and tail. Slim bird and slender bill, more like a warbler than tanager.

Caribbean slopes foothills and middle elevations, from 400 to 1200 m. Endemic to Costa Rica and Panama.

The sole member of the genus Chrysothlypis is a rather poorly known southern Central American endemic, although the fact that it ranges as far south as the Colombian border in Panama suggests that it might eventually be found in the latter country. Elsewhere it ranges exclusively over the Caribbean slope in Costa Rica, but is found, discontinuously, over both slopes of the isthmus in Panama; three subspecies, which differ principally in female plumage, are recognized. Males are beautiful and wholly unmistakable, mainly rich yellow, with a striking black eye, wings, mantle, and tail. In contrast, the much duller females are mainly yellow below, sometimes with a whiter ventral region, and principally green above. Both sexes have a very dark, somewhat conical, deep-based bill. Pairs regularly join mixed-species flocks, but are often among the first birds to move swiftly onwards in the pursuit of new feeding opportunities. (Cornell Lab, Neotropical Birds).