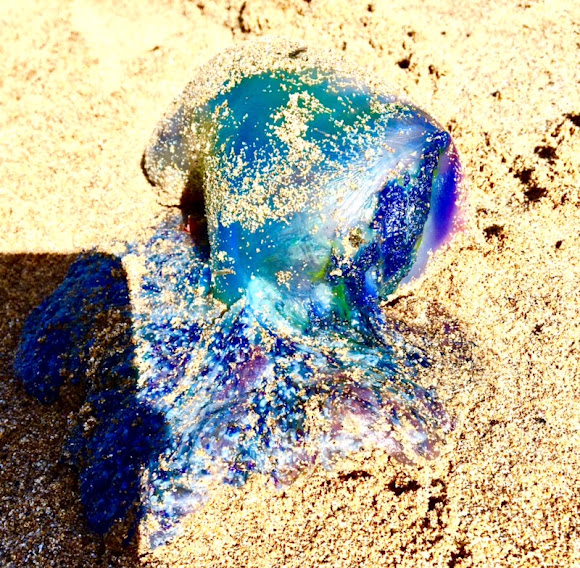 The Atlantic Portuguese man o' war (Physalia physalis), also known as the man-of-war, or floating terror, is a marine hydrozoan of the family Physaliidae found in the Atlantic Ocean, as well as the Indian and Pacific Oceans. Its venomous long tentacles deliver a painful sting, which on extremely rare occasions has been fatal to humans.Despite its outward appearance, the Portuguese man o' war is not a jellyfish but a siphonophore, which, unlike jellyfish, is not a single multicellular organism, but a colonial organism made up of specialized individual animals (of the same species) called zooids or polyps.These polyps are attached to one another and physiologically integrated, to the extent that they are unable to survive independently, and therefore have to work together and function like an individual animal.

Despite their look, Man o' wars are not jellyfish- they are siphonophores, multiple creatures seemingly appearing as one mass. They are extremely toxic. These creatures wouldn't normally appear on Englands beaches, but in October loads began to wash up- mainly due to Storm Ophelia

That is a pretty spotting!

Thank you so much everyone for all the favourites=)

Great shot Jamie!!! Thank you for the information and for sharing :)