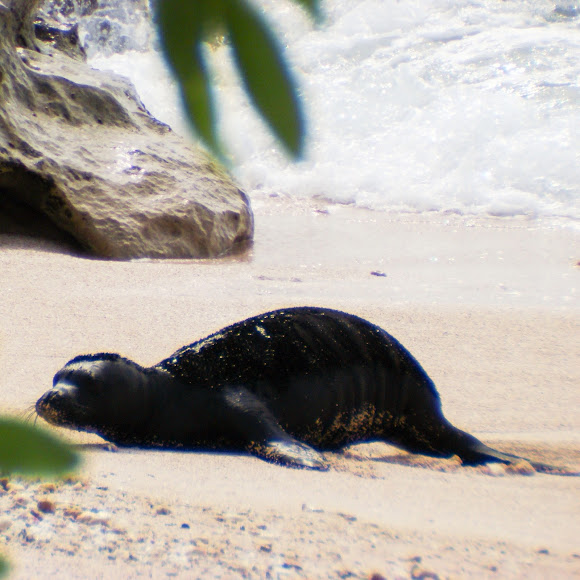 A two week old female Hawaiian Monk Seal pup (not yet named) with her mother, Honey Girl. They are some of the rarest marine mammals in the world. This is Honey Girl's 9th pup, and the first one born this year. Honey Girl is considered one of the most important breeding females for the species. She had a close call a few years back after she was hooked by fishermen through her mouth and tongue while pregnant. She successfully went through reconstructive surgery and recovery at the aquarium. Pups nurse for 4-6 weeks, during which time they quadruple their weight to 150-200 lbs and the mothers lose approximately 300 of their 400-600 lbs, after which the mothers leave their pups to fend for themselves. Since this pup is female it is possible she may be entered into Project "Headstart", which collects and tags female pups after weaning, and places them in a large, enclosed water and beach area with food and lacking disturbances. The female pups leave at roughly age three to seven months. Hawaiian Monk Seals are one of the most endangered marine mammals in the world with a population of less than 1100 and are declining by 4% every year. Monk seals are native to Hawaii and are not found anywhere else in the world.

Hawaiian monk seals occur throughout the Hawaiian Island chain. While sightings were previously rare in the main Hawaiian Islands, monk seals are now regularly seen there and births have been documented on all of the major islands. Hawaiian monk seals are non-migratory, and tend to remain near the atoll where they were born. However, some seals will relocate temporarily or permanently to other sites in the island chain, and long distance wanderers have been recorded.

Hawaiian monk seals are protected under the Endangered Species Act (ESA), Marine Mammal Protection Act (MMPA), and state law in Hawaii. It is illegal to interfere, harass or disturb them. PLEASE give them due respect and keep your distance if you see them on the beach.