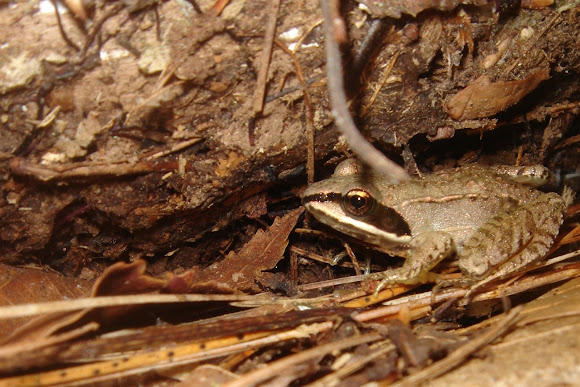 The wood frog (Rana sylvatica)[1][2][3] has a broad distribution over North America, extending from the southern Appalachians to the boreal forest with several notable disjunct populations including lowland eastern North Carolina. The wood frog has garnered attention by biologists over the last century because of its freeze tolerance, relatively great degree of terrestrialism (for a Ranid), interesting habitat associations (peat bogs, vernal pools, uplands), and relatively long-range movements. The ecology and conservation of the wood frog has attracted a great deal of research attention in recent years. This may be because they are often considered "obligate" breeders in ephemeral wetlands (sometimes called "vernal pools") that are themselves more imperiled than the species that breed in them (see below). The wood frog is the state amphibian of New York. Similar to other northern frogs that hibernate close to the surface in soil and/or leaf litter, wood frogs can tolerate the freezing of their blood and other tissues. Urea is accumulated in tissues in preparation for overwintering, and liver glycogen is converted in large quantities to glucose in response to internal ice formation. Both urea and glucose act as "cryoprotectants" to limit the amount of ice that forms and to reduce osmotic shrinkage of cells. Frogs can survive many freeze/thaw events during winter if not more than about 65% of the total body water freezes.

Wood frogs are forest-dwelling organisms that breed primarily in ephemeral, freshwater wetlands: woodland vernal pools. Long-distance migration plays an important role in their life history. Individual wood frogs range widely (hundreds of meters) among their breeding pools and neighboring freshwater swamps, cool-moist ravines, and/or upland habitats. Genetic neighborhoods of individual pool breeding populations extend more than a kilometer away from the breeding site. Thus, conservation of this species requires a landscape (multiple habitats at appropriate spatial scales) perspective. Wood Frogs calling in spring.ogg Spring mating calls Rana sylvatica primarily breeds in ephemeral pools rather than permanent water bodies such as ponds or lakes. This is believed to provide some protection of the adult frogs and their offspring (eggs and tadpoles) from predation by fish and other predators of permanent water bodies. Adult wood frogs emerge from hibernation in early spring and migrate to nearby pools. There, males chorus, emitting duck-like quacking sounds. Females deposit eggs attached to submerged substrate, typically vegetation or downed branches. Most commonly, females will deposit eggs adjacent to other egg masses, creating large aggregations of masses. Some advantage is conferred to pairs first to breed, as clutches closer to the center of the raft absorb heat and develop faster than those on the periphery. If pools dry before tadpoles metamorphose into froglets, they die. This constitutes the risk counterbalancing the anti-predator protection of ephemeral pools. By breeding in early spring, however, wood frogs increase their offspring's chances of metamorphosing before pools dry. Following metamorphosis, a small percentage (less than 20%) of juveniles will disperse, permanently leaving the vicinity of their natal pool. The majority of offspring are philopatric, returning to their natal pool to breed. Adult wood frogs spend summer months in moist woodlands, forested swamps, ravines, or bogs. During the fall, they leave summer habitats and migrate to neighboring uplands to overwinter. Some may remain in moist areas to overwinter. Hibernacula tend to be in the upper organic layers of the soil, under leaf litter. By overwintering in uplands adjacent to breeding pools, adult Rana sylvatica ensure a short migration to thawed pools in early spring. Wood frog are mostly diurnal and are rarely seen at night, except maybe in breeding choruses. They are one of the first amphibians to emerge for breeding right when the snow melts, along with Spring Peepers.

Wood frogs range from 51 millimetres (2.0 in) to 70 millimetres (2.8 in) in length. Females are larger than males. Adult wood frogs are usually brown, tan, or rust colored, and usually have a dark eye mask. Individual frogs are capable of varying their color; Conant (1958) depicts one individual when light brown and dark brown at different times. The underparts of wood frogs are pale with a yellow or green cast. Mer Bleue Conservation Area, showing dark skin tones If you see a small brown frog with a dark eye mask in the woods, it is likely to be a wood frog. There are no other species with a similar appearance to the wood frog in North America. The first evasive leap is fast and long. Close observation will often glimpse a second short dive under the leaf litter, making the frog appear to disappear. Feeding Wood frogs eat a variety of small, forest-floor invertebrates. Omnivorous, wood frog tadpoles feed on plant detritus, algae and also attack and eat eggs and larvae of amphibians, including those of wood frogs.[4] The feeding pattern of the wood frog, basically similar to that of other ranids, is triggered by prey movement and consists of a bodily lunge that terminates with the mouth opening and an extension of the tongue onto the prey.[5] Note that the ranid tongue is attached to the floor of the mouth near the tip of the jaw, and when the mouth is closed the tongue lies flat, extended posteriorly from its point of attachment. In the feeding strike, the tongue is swung forward as though on a hinge, so that some portion of the normally dorsal and posterior tongue surface makes contact with the prey. And it is at this point in the feeding strike that the wood frog differs markedly from more aquatic Rana species, such as the green frog, leopard frog, and bullfrog.[5] The wood frog makes contact with the prey with just the very tip of its tongue, much like a toad.[6] A more extensive amount of tongue surface is applied in the feeding strikes of the other 3 frog species, with the result that usually the prey is engulfed by the fleshy tongue and considerable tongue surface contacts the surrounding substrate.