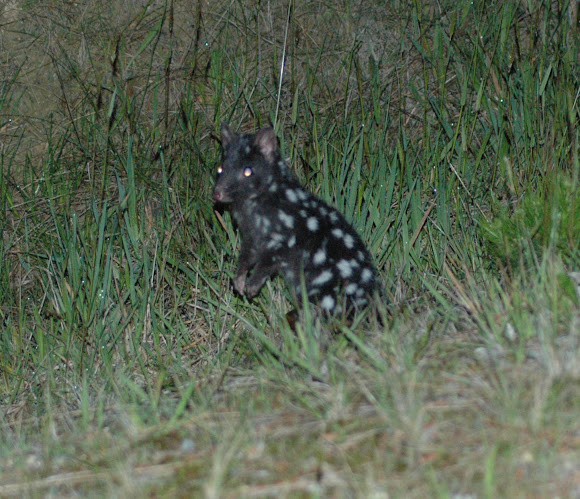 The eastern quoll is generally about the size of a small domestic cat, with an adult male averaging 60 cm and weighing approximately 1.3 kg. Their thick coat is covered by white spots, and ranges in colour from a light fawn to a near black, with an off-white belly. They can be distinguished from the tiger quoll by their slender build, pointed snout and lack of spots on the tail.

Two young black quolls, probably siblings, were playing in the grass near the isthmus road. We managed to spotlight this one just bright enough to get some grainy pictures. In Tasmania we call the Eastern Quoll, 'Spotted Quoll', or 'Native cat', and the other quoll, the Tiger quoll, is called 'Spotted-tail quoll'. The Eastern Quoll was once found on the mainland, but is now only found in Tasmania. It's been 50 years since the last confirmed sighting of an eastern quoll on mainland Australia, long enough to classify these marsupials as locally extinct. http://www.australiangeographic.com.au/j...

Thanks everyone. Let this be a lesson to all of you sitting on blurry photos. I only posted these, taken a few years back, because someone else posted one found dead by the side of the road, presumably killed by a car.

Congrats.. Great spotting.. I have not seen one of these for a very long time! :(

WOW SWEET SPOTTING Congrats of the spotting of the day

Congratulations. I am still to see a quoll in the wild of any species. Watching a NSW quoll expert 2 days ago he was describing how they use scat sites like message boards. Made me think how easy it is for even sensitive bushwalkers to upset their environment. Hope they're still doing ok in Tas. You must have been pleased to spot these. Great spotting.

Congrats on spotting of the day!

Thanks Leuba. No pressure. ; ) It's almost spring, so they'll soon be birds a-plenty. We haven't seen much in the way of marsupials at our place this winter (hardly any rain). It will be interesting to see if spring brings them out, or not.

Congratulations ! I was thinking that this deserves an SOTD - there you go. Well done and give us some more exciting stuff !!

Eastern quolls actually seem to be doing well in certain areas. Where we live, we free-range chickens and ducks, but in other places that wouldn't be possible because of quoll predation. It will be interesting to see what happens to quoll numbers as the devils continue to succumb to Devil Facial Tumor Disease (there's been a roughly 85% decrease in the devil pop. thus far). Australia has had, and continues to have, the most extinctions of any continent. Plants and animals here were just too different to be able to cope with what Europeans imposed upon the landscape.
Here's a photo I took of a Thylacine skull (Tasmanian tiger/wolf) housed in the Tasmanian Museum: http://twitpic.com/arknp6 You might notice that the jaw hinges well back, which gave them an extremely wide gape. With all those big sharp teeth it would have been quite intimidating looking. Which partially explains that they were quickly driven to extinction by bounty hunting. The last one died in the Tasmanian Beaumaris zoo in 1936.

I can't imagine how many species are now gone that we didn't know existed. Thank you for posting this wonderful critter. I hope its numbers increase out of the Near Threatened category and the range can expand back to where it use to be.

This is really cool man :) Are they endangered or threatened?

Thanks all. Cindy, that's pretty much the thing. Anything that land-based placental mammals have evolved into, marsupial mammals have evolved into something similar. There were even marsupial megafauna (with a wombat the size of a volkwagon). On one of my Tasmanian devil spottings, I mentioned the largest marsupial carnivore, the Thylacine, aka 'Tassie Tiger' or 'Tasmanian Wolf', the last of which died in 1936. And which almost no one had heard of.

Awesome spotting! I didn't even know these existed. Congratulations on your SOTD!

Very cool! Congrats on your SOTD!