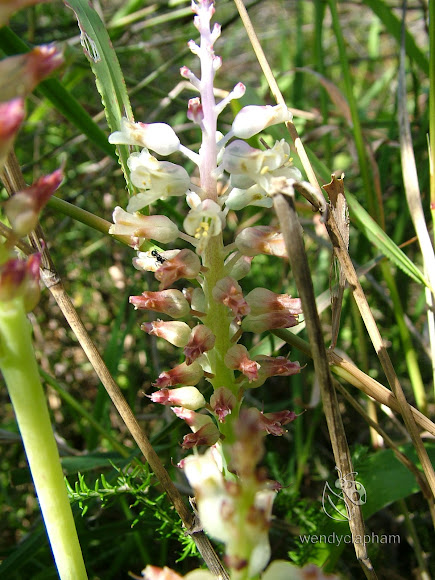 Like all other Lachenalia species, L. orchioides is a typical winter-growing bulb that is summer-deciduous, i.e. it becomes completely dormant during the hot dry summer months in the Mediterranean-type climate of the Western Cape. It consists of a single white fleshy bulb about 10–20 mm in diameter, fine white adventitious roots, and two strap-like lanceolate leaves up to 150 mm long. In some individuals these leaves are covered in dark blotches, whereas in others they are plain green. They never have little bumps or pustules which are quite common in certain other Lachenalia species. The leaves will start to emerge a few weeks after the first rains in autumn and wither naturally in late spring/early summer. The inflorescence can grow up to about 200 mm tall and appears in early to middle spring. Typically in L. orchioides the inner perianth segments of the flower are significantly longer than the outer segments. The fruit are small capsules that ripen a month or two after flowering to release small shiny black seeds.Flower colour varies depending on the variety, of which there are two: L. orchioides var. orchioides which can have a pale blue base and shades to a typically greenish-yellow or, less commonly in populations on the southern Cape Peninsula, to cream or pure white, sometimes with a blue tinge throughout. Both varieties fade to a dull red brown. Variety orchioides is also quite sweetly scented.

The genus Lachenalia is generally restricted to the winter-rainfall parts of South Africa and Namibia. L. orchioides is found in the southern Western Cape. The variety L. orchioides var. orchioides occurs fairly commonly on flats or stony slopes from the Cape Peninsula to as far north as the Clanwilliam area, as far east as Swellendam and as far inland as Worcester. The variety L. orchioides var. glaucina is restricted to the eastern slopes of Table Mountain on the Cape Peninsula, often occurring in more shady habitats in rocky soils.