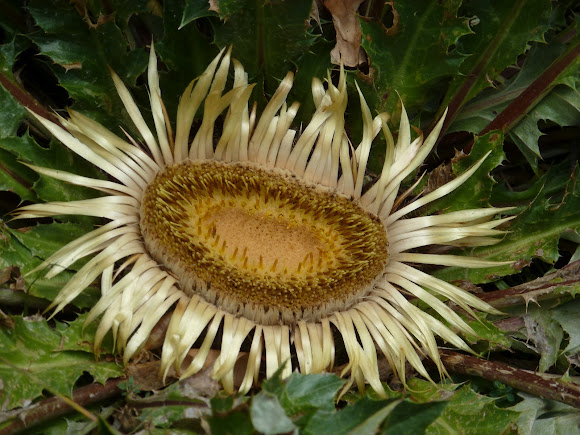 Carlina acaulis (Stemless carline thistle, Dwarf carline thistle, or Silver thistle) is a perennial dicotyledonous flowering plant in the family Asteraceae, native to alpine regions of central and southern Europe.[1] The common names are descriptive of the manner that its flower head rests directly upon a basal leaf rosette.

It prefers chalky soils and dry pastures in environments from valleys up to an altitude of 2,800 m.

The rhizome contains a number of essential oils, in particular the antibacterial carlina oxide.[3] The root was formerly employed in herbal medicine as a diuretic and cold remedy.[4] While young, the flowerhead bud can be cooked and eaten in a similar manner to the Globe artichoke, which earned it the nickname of hunter's bread.

thanks Daniele for the ID.