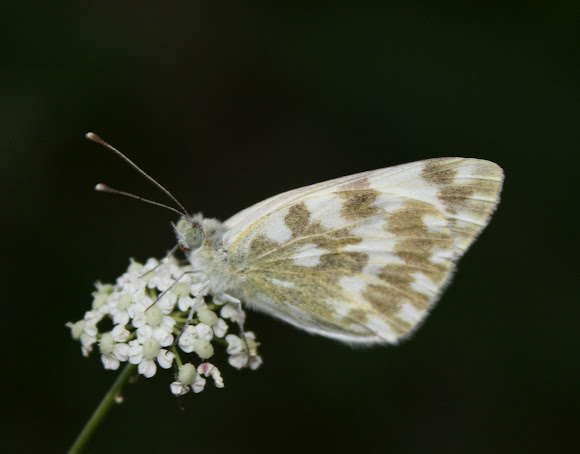 like explained in the comments above,by Daniele and Bayucca this is a very dificult sp to id and so i put the info about the two butterflyes daplidice and edusa Pontia edusa is a small to medium-sized migrant butterfly, with a wingspan reaching about 45 mm. The upperside of the wings is white, with black stains on the top of the forewing and hindwing. The hind wing undersides have greenish-gray spots. The butterfly is nearly identical to Pontia daplidice. Investigations of the genitals are the only way to distinguish between these two types. Caterpillar The adults fly from March to October[1] [2] with two to four generations depending on the latitude. The eggs are laid singly and have an incubation period of seven days. The caterpillars are present from May. They are greysh-greenish, with black dots and broad yellow stripes, quite similar to the larva of the Cabbage Butterfly (Pieris brassicae). The larvae feed on Resedaceae species. Pontia edusa hibernates in the chrysalis stage. Introduction: There are, apparently, two species of Bath White in Europe and N Africa - Pontia daplidice and Pontia edusa. The differences appear to be biochemical. So to all intents and purposes the species are impossible to separate except in the laboratory. Distribution: Most of Europe, migrating northwards into S UK (very rare), N Germany and S Scandinavia. Migrating individuals from the south presumably reinforce existing populations further north. The split between daplidice and edusa occurs roughly along the eastern border of France. To the west is daplidice, to the east is edusa. North Africa hosts daplidice. It is often common where found but can crop up just about anywhere as singletons. Identification: Superficially similar to the Dappled Whites, Euchloe species plus the other Bath Whites. Follow this link for the to the Pontia species. Flight time: Flies from the beginning of spring (e.g. March in S Europe, later further north) until late summer and becoming more frequent as the year progresses. Habitat: Can appear just in about any open grassy or flowery place. Typically around bare ground with the foodplant Reseda sp. (e.g. Weld, Mignonette). Bare ground could be stony or rocky places or disturbed ground around cultivated areas or roadsides. Also takes various Brassicaceae (Cabbages). Behaviour: his is a very strong flier. It is usually seen flying very rapidly and directly across usually dry places with grass or stones. It is attracted to flowers but only stays briefly before flying on. In the morning though it can be found warming up on rocks in the sun when close approach is easiest. In flight it can be separated with with 90% certainty from the Dappled Whites - not sufficient for recording purposes but a good indication. This species flies with shorter, faster wing beats and the wings appear more pointed when in flight than the Dappled Whites.

Thanks for the link, Daniele. I have known this before it is dated from 1997. My info were from 2011, so there are still discussions about the taxonomy. Interesting is the fact that in the Ligurian aera and the Piedmont both, Daplidice and Edusa are found. This might be some of a "borderline" between the two species. One problem: Pontia is a migrant butterfly! Considering the location and "usual" range, it might actually be more Daplidice than Edusa. But in my opinion, knowing about the tricky differentation and the experts troubles, we on Project Noah should put these facts in consideration as well.

No worries Antonio and bayucca, best way to do it! These butterflies make for such an interesting case... bayucca you be interested to have a glimpse at this...
http://www.jstor.org/discover/10.2307/24...

Thanks Daniele and bayucca for your id and great info,i presume that daniele you agreed with bayucca idea,i'll put it as id :)

I would either call this one Pontia sp. or Pontia daplidice/edusa. It is not possible to solve the taxonomy of these two species. There are intense discussion about the 30 species of this daplidice group.