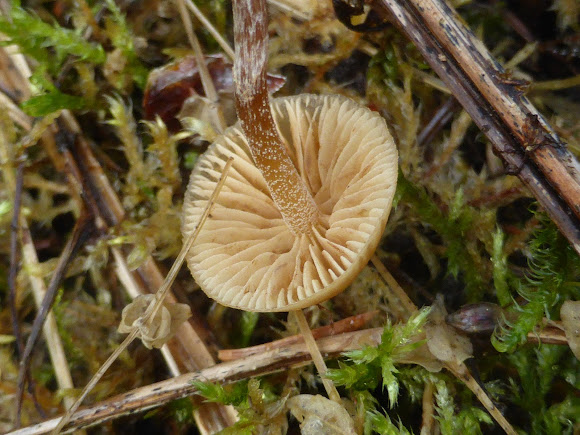 Pale tan mushroom with a brown stipe. The stipe had white bumps, especially near the cap.

Growing among lots of mosses and some small plants on a plastic box that appeared to have washed up a few years prior, possibly during the earthquake and tsunami that hit Japan. I found the box several yards up from the shore, so however it got there, it took a lot more force than the average tide to push it up that high.

We found lots of marine debris on this trip that I suspect was from the tsunami that hit Japan several years ago. This was a marine debris cleanup trip, so we were targeting beaches with higher concentrations of debris; many of them seemed to have Japanese-style fishing floats, bottles and containers with Japanese words on them, and they also seemed to have been pushed up much higher above the tide line than can be explained by regular tides. They also were partially embedded in the dirt in many instances, and had clearly been there several years but not decades. This box was a good example of that; as the plants and fungi had started to reclaim it and grow inside it.