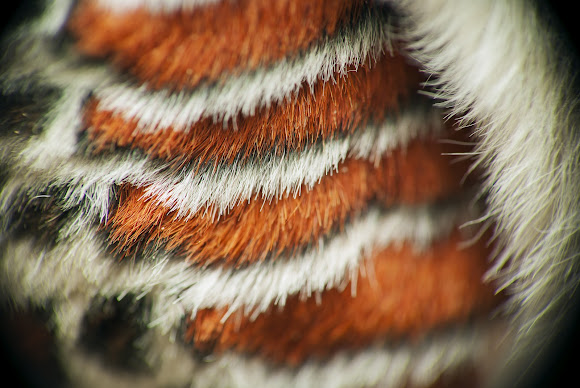 This very large and beautiful moth was attracted to my porch light. I found several of them that weekend, but haven't seen one since. This one had lost a left antennae and taken some damage to the middle left leg, but seemed otherwise healthy.

The first photo is a macro of the moth's abdomen, and the second photo is a macro of the dark 'eye' at the tip of the fore-wing. The fourth picture was taken in the morning of the next day -- you can see that there are not so many hard shadows from the flash. It was taken within 12hrs or so, so I'm hoping it's okay to put it on the same spotting (missing antennae make it clear that it's the same subject).

great spot, the first one really does looks like tiger..

Thanks Christy! I took this shot with 300mm lens mounted on the bayonet mount, and a 135mm mounted backwards on the front of the 300mm. My 135mm is broken, and cannot focus, so do not expect to be able to use this setup. The much better kit is a bellows ($40.00 on e-Bay) with a 50mm prime mounted backwards (reverse mount is $10.00 on e-Bay, and the 50mm will be around $300.00 brand new regardless of brand). You will need have a flash mounted very close to the lens, and ideally very diffused. All told, about half the cost of a proper macro lens (if you're serious about photography you should have the 50mm and flash already anyway, so if you make your own diffuser, it's more like $50.00!!!!

I want your lens!! Great macros!!

Updated with picture of the under-wing.

Thanks! I've retired this 2 lens kit in favour of a lighter one -- I think the belly may be the best shot I got before switching to a bellows.