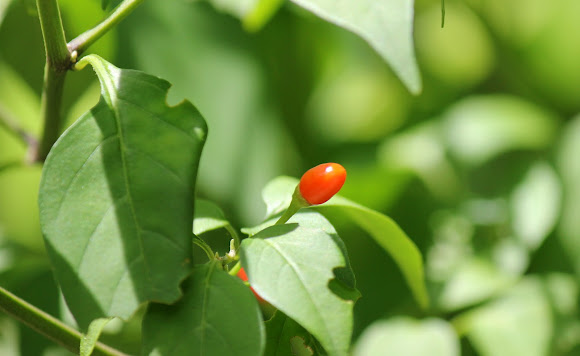 Photo take in a jungle path this is a small bush whit small leafs and has for fruit a very small chile about 7 mm long each red bright color. Know as well as Chiltepin or turkey, bird’s eye. Very common on the Yucatan Peninsula.The tiny chile peppers of C. a. var. glabriusculum are red to orange-red, usually slightly ellipsoidal, and about 0.8 cm in diameter. Some strains of tepin peppers are much closer to perfectly round when fresh. If a tepin pepper is dried, it appears quite round even if it was slightly ellipsoidal when fresh. Tepin peppers are extremely hot, measuring between 50,000 and 100,000 Scoville Units. Wikipedia

It prefers well-drained soils, such as silty or sandy loams, can be found in Texas, Arizona, and Florida in the Southern United States, the Bahamas, the Caribbean, Mexico, Central America, and Colombia