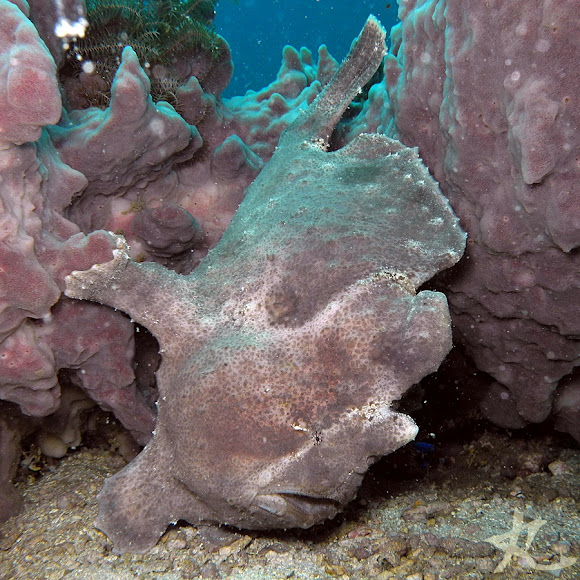 A. commerson (a.k.a. Commerson's Frogfish, Giant Angler) has a somewhat compressed, globular body, and sports different colors depending on their surroundings. It has a large, upward-directed mouth that is protrusible. True to its name, and like other frogfish species, it has a "fishing pole" with a lure, located on its head above its mouth. It has limb-like pectoral fins with an "elbow" joint. It feeds on small fish, and grows to about 35cm in length.

Spotted this large specimen (about 30cm long) at a depth of 15m, off the northern coast of Talikud Island (dive site: Angel's Cove). It was nestled in between two barrel sponges, the color of which the frogfish almost perfectly matched.

Thanks, Blogie, for your generous offer of photos! I may take you up on that. :-)

You are very welcome! What you do is amazing.

Hi lori.tas. Maybe you couldn't see them because they were perfectly camouflaged? ;) But, you know, it's infinitely better seeing them in their natural habitats.

Well spotted. I try to find these in aquariums, where they are labeled, and half the time I still can't find them.

This is awesome! Thank you so much for sharing! :)

Thanks very much, Bernadette! It's wonderful that you're teaching kids about the creatures of the sea. If you need photos for your poem, feel free to use mine. :)

Thanks, Blogie, for your great collection of frogfish!! I can't decide which one is my favorite. I was writing a list poem for children about the fish in the Red Sea and just love all the crazy names I came across.

Thanks, Maria! I'm still very far from having a good collection of frogfish, though...

What an amazing and fascinating fish - thanks so much for posting this. Love your spottings!

Thanks, Bernadette and East End!

@Bernadette - They come in different shapes and sizes and colors. Do a search for "frogfish" on my collection page and you'll see those species I've already spotted. :)

Excellent! I had been wondering what a frogfish looked like.