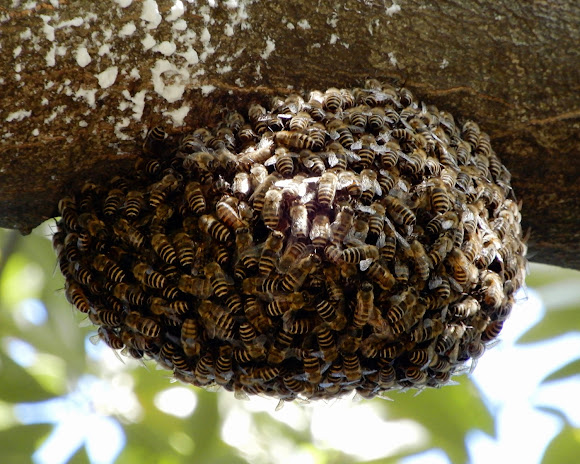 A spotting of Japanese Honey Bees in Sagamihara, Kanagawa, Japan These bees appear to be engaging in their "defensive ball", a behavior unique to the species.

Spotted on a tree limb in an urban area south of Tokyo.

A. c. japonica has a well-known defensive behavior when dealing with hornets which no other honeybee displays. Although a handful of Asian giant hornets can easily defeat the uncoordinated defenses of a honey bee colony, the Japanese honey bee (Apis cerana japonica) has an effective strategy. As a hornet enters the hive, a mob of hundreds of honey bees surrounds it in a ball, completely covering it and preventing it from reacting effectively. The bees violently vibrate their flight muscles in much the same way as they do to heat the hive in cold conditions. This raises the temperature in the ball to the critical temperature of 46 °C (115 °F). In addition, the exertions of the honey bees raise the level of carbon dioxide (CO2) in the ball. At that concentration of CO2, the honey bees can tolerate up to 50 °C (122 °F), but the hornet cannot survive the combination of a temperature of 46 °C (115 °F) and high carbon dioxide level. Some bees do die along with the intruder, much as happens when they attack other intruders with their stings, but by killing the hornet scout, they prevent it from summoning reinforcements that would wipe out the entire colony.