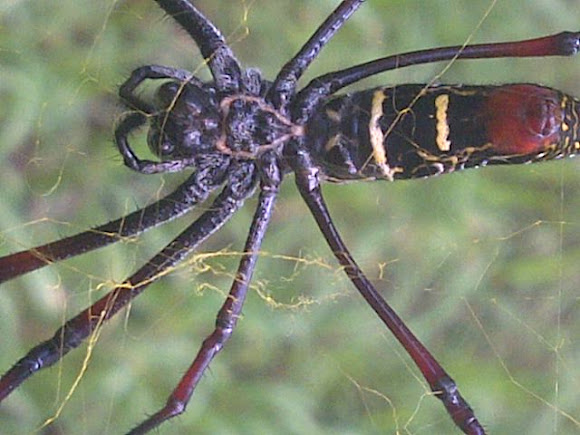 The Red-legged Golden Orb-Web Spider (Nephila inaurata), lives in South Africa, Madagascar and other islands in the Indian Ocean. Like other members of the golden-orb spiders it can weave webs so strong that sometimes even birds and bats get caught. The spider has a leg-span of up to 10cm and is commonly kept in captivity.

can be found in damp places such as large trees and unpolluted areas to which no cars have access; normally several are strung together to form enormous "homes" so as to cover as much surface area as possible

Wow one of the most beautiful spiders i have come across, my camera does not do it justice!

Thanks Bayucca, that looks right!!

I think I found it: Nephila inaurata, but maybe not the subspecies Madagascariensis (which is also be reported from RSA). I would be happy, if you could verify yourself! There are probably some wrong names on the web...
http://online-field-guide.com/Nephilamad...
Most probably Nephila inaurata madagascariensis:
http://vesmir.msu.cas.cz/Madagaskar/imag...
http://vesmir.msu.cas.cz/madagaskar/imag...
Probably same one as yours:
http://www.safari-afrika.de/html/nephila...
Probably yours but correct name???
http://afriqueescapade.blogspot.ch/2011/...
http://de.123rf.com/photo_5570015_golden...
http://de.123rf.com/photo_7918723_golden...

Tethragnathidae, Nephilinae (or Nephilidae??), Nephila sp., same one from the link, but no ID, unfortunately. Obviously not so easy to find a trustable picture for comparison...