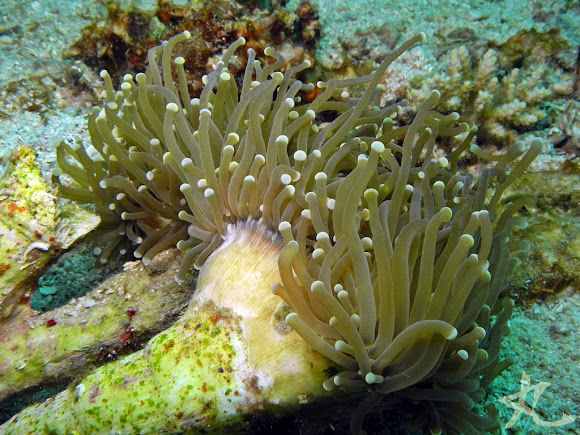 A type of stony coral, the Joker Coral is a reef-building species whose polyps have tentacles that are always extended (except when severely disturbe). The polyps excrete a skeleton and form colonies that can extend up to a meter in diameter.

E. glabrescens can be found in a wide range of reef environments, at depths of 1 to 35m.

This coral can be easily mistaken to be a sea anemone or a mushroom coral. The 4th photo illustrates this -- the tentacles look very much like those of sea anemones', and the coral even hosts an anemone shrimp! The first 3 photos are of one colony, and the 4th photo is of another, taken at a different site.

Thanks, Gerardo and Leuba! :)

I know right? But I couldn't find any links explaining why it has that name. Maybe because it tricks you into thinking that it's a sea anemone...? :D