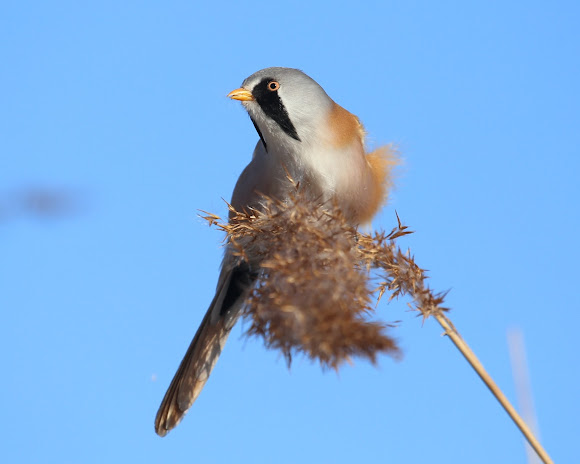 Although called a 'Bearded Tit' this species hasn't got a beard and isn't even of the Tit family. It is of the Babbler family and is the sole representative of this group in Europe.

Thank you Sharon. Sorry I only just noticed your comment.

That is a stunning photo :-)

Ava, I take your point but have to advise that when I went to edit and add a reference, the system refused to load the updated sighting quoting that my URL was incorrect. I am sorry but I don't know how to fix that.
Robert

Thank you everyone for your great comments. Funny thing is the birds were feeding on reed flowers in a gale so getting these images was quite a challenge.

What a beautiful bird captured in your amazing photos!

Amazing series! Thank you for sharing :)

This is a lovely and interesting spotting. To make it complete, and useful to researchers using this site for data, please edit this and add a reference (Wikipedia, Encyclopedia of Life, something else) about this species in the reference field of your spotting. Please do this for each photo you post. Thanks for helping to make Project Noah a complete reference tool for scientists.