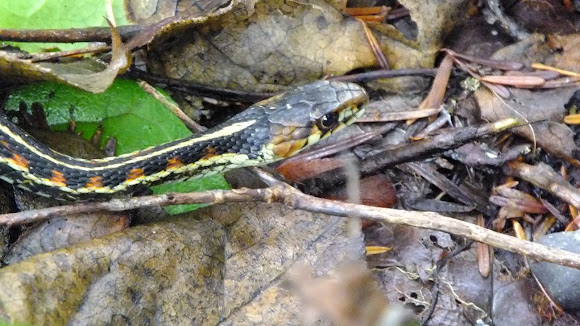 Common garter snakes are highly variable in color pattern. They typically have three light stripes that run along the length of their body on a black, brown, gray, or olive background. The stripes can be white, yellow, blue, greenish, or brown. One stripe runs down the center of the snake's back, the other two stripes run alongside this central stripe. Sometimes the stripes are absent or poorly defined. Some garter snakes have alternating rows of dark spots that run along the stripes, making the stripes look more like checkerboard patterns of light, rather than lines. Common garter snakes have a head that is wider than the neck and is uniformly dark. Their tongues are red, tipped in black, and their scales are keeled (with a raised ridge along the length of the scale). The chin, throat and belly resemble the stripes in coloration, ranging from white to yellow, greenish, blue, or brown. Common garter snakes grow to be 46 to 137 cm in total length. Males are generally smaller than females and have longer tails. Young common garter snakes are born at 12.5 to 23 cm long and are similar in appearance to the adults. There are many dozens of recognized regional populations of common garter snakes that have distinct color patterns. In some areas there are populations that have a high percentage of entirely black garter snakes.

Common garter snakes are very widespread, highly adaptable and can survive extreme environmental conditions. Common garter snakes are found in a wide variety of habitats, including meadows, marshes, woodlands, and hillsides. They tend to prefer moist, grassy environments. They are often found near water, such as near the edges of ponds, lakes, ditches, and streams, and are common in suburban and urban areas with plenty of cover (debris, boards, vegetation, logs, or rocks).