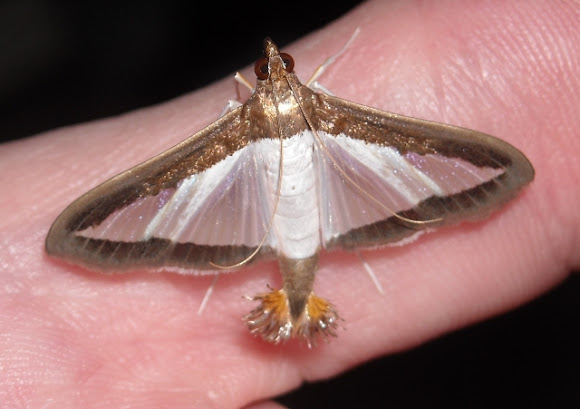 From Wikipedia: The Melonworm Moth (Diaphania hyalinata) is a moth of the Crambidae family. The wingspan is 27–30 mm. The wings are pearly white centrally, and slightly iridescent, but are edged with a broad band of dark brown. Adults are on wing from October to November in the northern part of the range and all year round in multiple generations in Florida and further south. The larvae feed on various plants in the cucumber family, including cucumber, melon and squash. They construct a loose silken structure under the leaves of their host plant. ----------------------------------------------------------------- From EDIS: *Distribution* Melonworm, Diaphania hyalinata Linnaeus, occurs throughout most of Central and South America and the Caribbean. The United States is the northern limit of its permanent range, and wintertime occurrence generally is limited to south Florida and perhaps south Texas. Melonworm disperses northward annually. Its distribution during the summer months is principally the southeastern states, though occasionally it disperses north to New England and the Great Lakes region. *Life Cycle and Description* The melonworm can complete its life cycle in about 30 days. It is present throughout the year in southern Florida, where it is limited mostly by availability of host plants. It disperses northward annually, usually arriving in northern Florida in June and other southeastern states in July, where no more than three generations normally occur before cold weather kills the host plants. *Egg* Melonworm moths deposit oval, flattened eggs in small clusters, averaging two to six eggs per egg mass. Apparently they are deposited at night on buds, stems, and the underside of leaves. Initially they are white or greenish, but soon become yellow in color. They measure about 0.7 mm in length and 0.6 mm in width. Hatching occurs after three to four days. *Larva* There are five instars. Total larval development time is about 14 days, with mean (range) duration the instars about 2.2 (2-3), 2.2 (2-3), 2.0 (1-3), 2.0 (1-3), and 5.0 (3-8) days, respectively. Head capsule widths are about 0.22, 0.37, 0.62, 1.04, and 1.64 mm, respectively (Smith et al. 1994). Larvae attain lengths of about 1.5, 2.6, 4.5, 10, and 16 mm in instars one through five, respectively. Newly hatch larvae are colorless, but by the second instar larvae assume a pale yellow-green color. They construct a loose silken structure under leaves which serves to shelter them during the daylight hours. In the fifth instar, larvae have two subdorsal white stripes extending the length of the body. The stripes fade or disappear just prior to pupation, but they are the most distinctive characteristic of the larvae. *Pupa* Prior to pupation, larvae spin a loose cocoon on the host plant, often folding a section of the leaf for added shelter. The pupa is 12 to 15 mm in length, about 3 to 4 mm in width, and fairly pointed at each end. It is light to dark brown in color. The pupal stage persists for nine to 10 days. *Adult* The moth's wingspan is about 2.5 cm. The wings are pearly white centrally, and slightly iridescent, but are edged with a broad band of dark brown. Moths frequently display brushy hairpencils at the tip of the abdomen when at rest. Melonworm moths remain in the crop during the daylight hours. While they are generally inactive during the day, they will fly short distances when disturbed. Smith (1911) provides a detailed account of melonworm biology. *Damage* Melonworm feeds principally on foliage, especially if foliage of a favored host plant such as summer or winter squash is available. Usually the leaf veins are left intact, resulting in lace-like plant remains. However, if the available foliage is exhausted, or the plant is a less preferred species such as cantaloupe, then the larva may feed on the surface of the fruit, or even burrow into the fruit. Growers sometimes refer to these insects as "rindworms" because they cause scars on the surface of melons. In a study of melonworm damage potential to summer squash conducted in south Florida, melonworm caused a 23 % yield loss due to foliage damage (indirect loss) and a 9 to 10% yield reduction due to fruit damage (direct loss) (McSorley and Waddill 1982). Kelsheimer (1949) considered this insect to be the most important pest of cucurbits in Florida. *Natural Enemies* Among the common natural enemies of melonworm are Apanteles sp., Hypomicrogaster diaphaniae (Muesebeck), Pristomerus spinator (Fabricius) (all Hymenoptera: Braconidae), Casinaria infesta (Cresson), Temelucha sp. (both Hymenoptera: Ichneumonidae), and undetermined trichogrammatids (Hymenoptera: Trichogrammatidae) (Pena et al. 1987b, Capinera 1994). However, additional species parasitized melonworm, including Gambrus ultimus (Cresson), Agathis texana (Cresson) (both Hymenoptera: Ichneumonidae) and an undetermined fly (Hymenoptera: Tachinidae). The tachinids known from melonworm are Nemorilla pyste (Walker) and Stomatodexia cothurnata (Wiedemann). Studies conducted in Puerto Rico (Medina-Gaud et al. 1989) reported levels of parasitism reaching 24%. Generalist predators such as Calosoma spp. and Harpalus (both Coleoptera: Carabidae), the soldier beetle Chauliognathus pennsylvanicus DeGeer (Coleoptera: Cantharidae), and the red imported fire ant Solanopsis invicta Buren (Hymenoptera: Formicidae) have also been reported to be mortality factors.

It is found in eastern North America, south to Central and South America and the Caribbean.

I took a picture of this beautiful moth while it was on my hand. This is just one of the many cool and beautiful moths and butterflies we have around our home. :)

Thank you, Maria dB and OnengDyah! :)

Great spotting as your first on Noah - welcome to the Project!