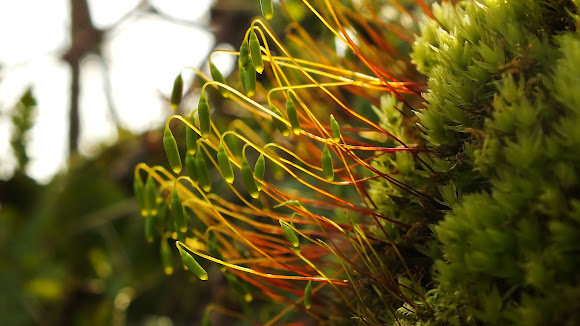 Bryum is a genus of mosses in the family Bryaceae. It was considered the largest in the world until it was split into three in a 2005 publication. As of 2013, it and Bryaceae have been in the process of undergoing significant change based on recent DNA studies. Many genera, historically placed in the Bryaceae, such as Pohlia, Epipterygium and Roellia, are now placed in the Mniaceae. Leptobryum has been transferred to the Meesiaceae.

I'm not sure which species of Bryum moss this is, I've been told that a microscopic examination is needed for a correct identification. Spotted in Bruggenbos in rural area of Twello, Holland. (sources:see reference)