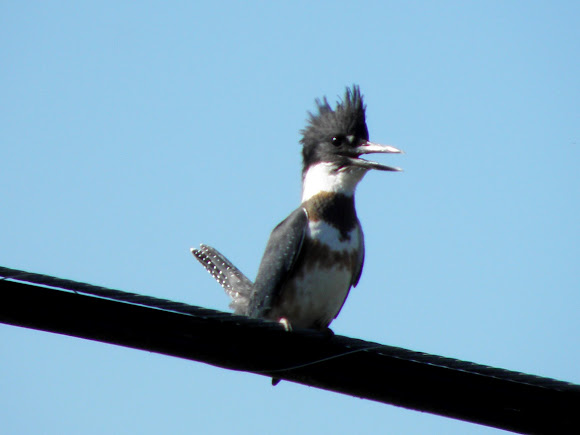 the common kingfisher of the Northern US states. Juveniles have rust blending in the wth blue upper band

near highway, irrigation/drainage canal and river

This one of two youngsters.newly fledged. They were flying around, calling loudly and returning to this perch.I had tried all summer to get photos of the parents. To get this photo my husband stopped in the middle of the highway and stayed there until traffic approached. We saw two similar youngsters with a parent bird about 25 miles away behaving similarly yesterday

This stretch of highway is a wildlife watchers paradise. I get shots of raptors, including falcons and bald eagles year round, displaying red wings in spring, and migratory waterfowl in winter. These guys, however, have been leading me a merry chase

Great shots! Worth the highway jacking :)