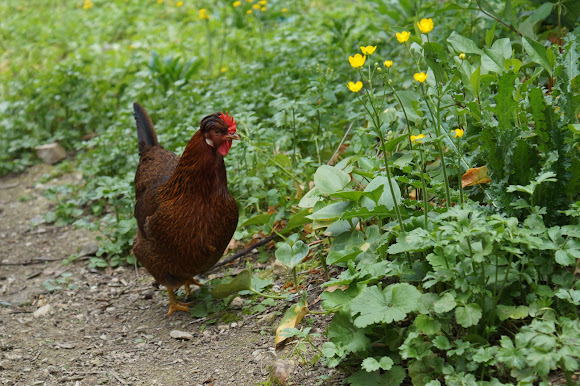 The chicken (Gallus gallus domesticus) is a domesticated fowl, a subspecies of the red junglefowl. As one of the most common and widespread domestic animals, with a population of more than 24 billion in 2003,[1] there are more chickens in the world than any other species of bird. Humans keep chickens primarily as a source of food, consuming both their meat and their eggs.

Chickens are omnivores.[12] In the wild, they often scratch at the soil to search for seeds, insects and even larger animals such as lizards, small snakes or young mice.[13] Chickens may live for five to ten years, depending on the breed.[14] The world's oldest chicken, a hen, died of heart failure at the age of 16 according to Guinness World Records.[15] Roosters can usually be differentiated from hens by their striking plumage of long flowing tails and shiny, pointed feathers on their necks (hackles) and backs (saddle), which are typically of brighter, bolder colours than those of females of the same breed. However, in some breeds, such as the Sebright chicken, the rooster has only slightly pointed neck feathers, the same colour as the hen's. The identification can be made by looking at the comb, or eventually from the development of spurs on the male's legs (in a few breeds and in certain hybrids, the male and female chicks may be differentiated by colour). Adult chickens have a fleshy crest on their heads called a comb, or cockscomb, and hanging flaps of skin either side under their beaks called wattles. Collectively, these and other fleshy protuberances on the head and throat are called caruncles. Both the adult male and female have wattles and combs, but in most breeds these are more prominent in males. A muff or beard is a mutation found in several chicken breeds which causes extra feathering under the chicken's face, giving the appearance of a beard. Domestic chickens are not capable of long distance flight, although lighter birds are generally capable of flying for short distances, such as over fences or into trees (where they would naturally roost). Chickens may occasionally fly briefly to explore their surroundings, but generally do so only to flee perceived danger.