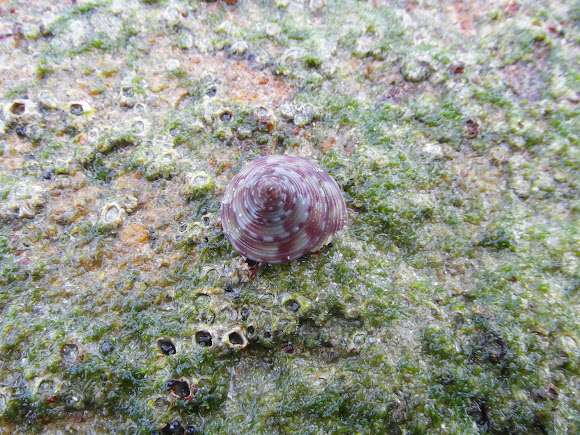 The solid, regularly conical shell is straight-sided and imperforate. The shell contains up to 12-13 whorls. It is sculptured with regular spiral grooves and ridges, traversed by fine prosocline growth lines. The apex is minute, composed of a single smooth rounded whorl, Several whorls follow, each with 4 granose spiral ridges. These become smooth and either obsolete or narrow on the later whorls. The body whorl has a prominent peripheral keel bearing two broad ridges; ridges above suture in preceding whorls. Base of shell rather flat, inner lips reflected over shallow umbilical groove. The periphery is angular, encircled by a smooth rounded rib that becomes a supra-sutural band or fasciole on the spire. The base of the shell is nearly flat. The aperture is quadrate. The cylindrical columella is nearly straight. The color of the shell is variable. The ground color is yellowish brown, pale pink, or violet with streaks and blotches of brown, red or purple on the periphery. Blotches on the keel are generally darker, more frequent and more regular than on other parts of shell. It is radiately clouded with brown on the upper surface. The base of the shell is unicolored or obscurely radiately streaked. Pure white or violet specimens are occasionally found.

This marine species occurs in European waters from Northern Norway to the Azores; in the Mediterranean Sea.