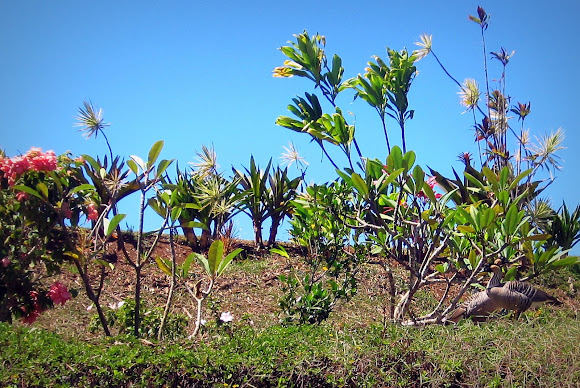 The Hawaiian goose, only found on Kauai, Maui and Hawaii. A medium sized goose likely descended from migrating Canada goose populations after the formation of Hawaii. Black head and hindneck, with black and white diagonal stripes on the neck.

Found in shrubland, grassland, coastal dunes, and lava plains, and anthropogenic habitats such as pasture and golf courses. Frequents areas where it can graze on leaves, seeds, fruit, and flowers of grasses and shrubs. Or where it can beg treats from unsuspecting tourists (Don't feed them!)

The world's rarest goose, one time highly in danger of extinction, the wild population was estimated at around 800 in 2004. The Hawaiian name Nēnē comes from its soft call. (Information via Wikipedia.) This pair seemed like it was separate from the group that normally flew over this location in the afternoon. One of the birds is clearly banded, but I couldn't get a clear shot of the band.

Nice series.... love the landscape too.